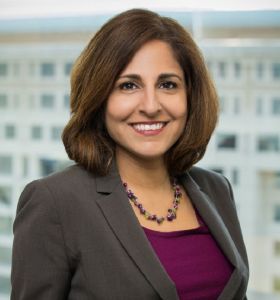 Neera served as a commissioner on IPPR's Commission on Economic Justice (2016-2018). She is currently US President-elect Biden's nominee to be Director of the Office of Management and Budget.

Tanden previously served as senior advisor for health reform at the Department of Health and Human Services, working on President Barack Obama’s health reform team in the White House. Prior to that, she was the director of domestic policy for the Obama-Biden presidential campaign, where she managed all domestic policy proposals. Neera also served as policy director for the Hillary Clinton presidential campaign, where she directed all policy work, ranging from domestic policy to the economy to foreign affairs, and managed day-to-day policy announcements.

Before the presidential campaign, Neera was Senior Vice President for Academic Affairs at CAP. Prior to that, she was one of the first senior staff members at the Center, joining as Senior Vice President for Domestic Policy when CAP first opened its doors. In between, Neera was legislative director for Sen. Clinton, where she oversaw all policy and legislation in the Senate office. In 2000, she was Hillary Clinton’s deputy campaign manager and issues director for her Senate campaign in New York. Neera also served as associate director for domestic policy in the Clinton White House and senior policy advisor to the first lady.

Neera was named one of the “Most Influential Women in Washington” by National Journal and received the India Abroad Publisher’s Award for Excellence in 2011. She was recently included on Elle magazine’s “Women in Washington Power List” and recognized as one of Fortune magazine’s “Most Powerful Women in Politics.” She received her bachelor of science from UCLA and her law degree from Yale Law School.