A UK-wide programme of public meetings

The IPPR Commission on Economic Justice made the case for radical economic reform. Following the publication of the Commission's final report, Prosperity and Justice, IPPR held a series of public meetings across the UK. The events connected policy makers and local leaders with civil society to discuss what economic justice would look like in our nations and regions. 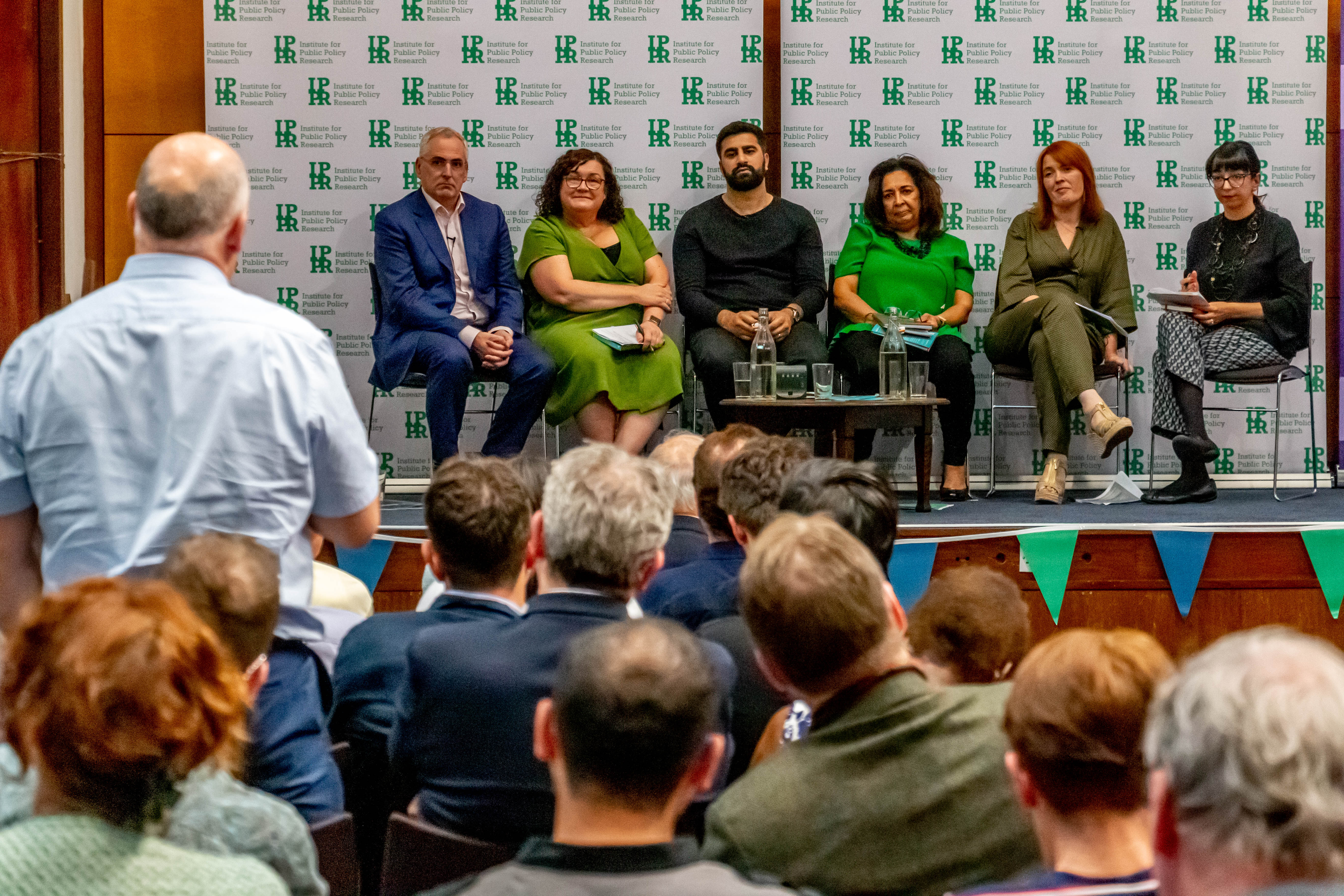 The programme opened in Newcastle, with the UK's newest metro mayor Jamie Driscoll sharing his vision for a just and prosperous economy in the North East, including a just transition to a low-carbon economy and the injustice of in-work poverty in the North East.

The Mayor was joined by a panel of speakers from business, trade unions and civil society in the North East, including Community Organiser and Member of the Commission on Economic Justice Sara Bryson, who spoke of the need to build power amongst communities to achieve lasting change. We also heard from audience members interested in creative industries, ethnicity paygaps and national representation. IPPR North Director Sarah Longlands chaired the panel and spoke to North East Times about regional inequality and the purpose of the economy.

For the second event in the series, we were in Manchester with Mayors Andy Burnham and Steve Rotheram, who both argued for devolution as the route to economic justice in the North West. You can listen to a podcast of both of their speeches here. 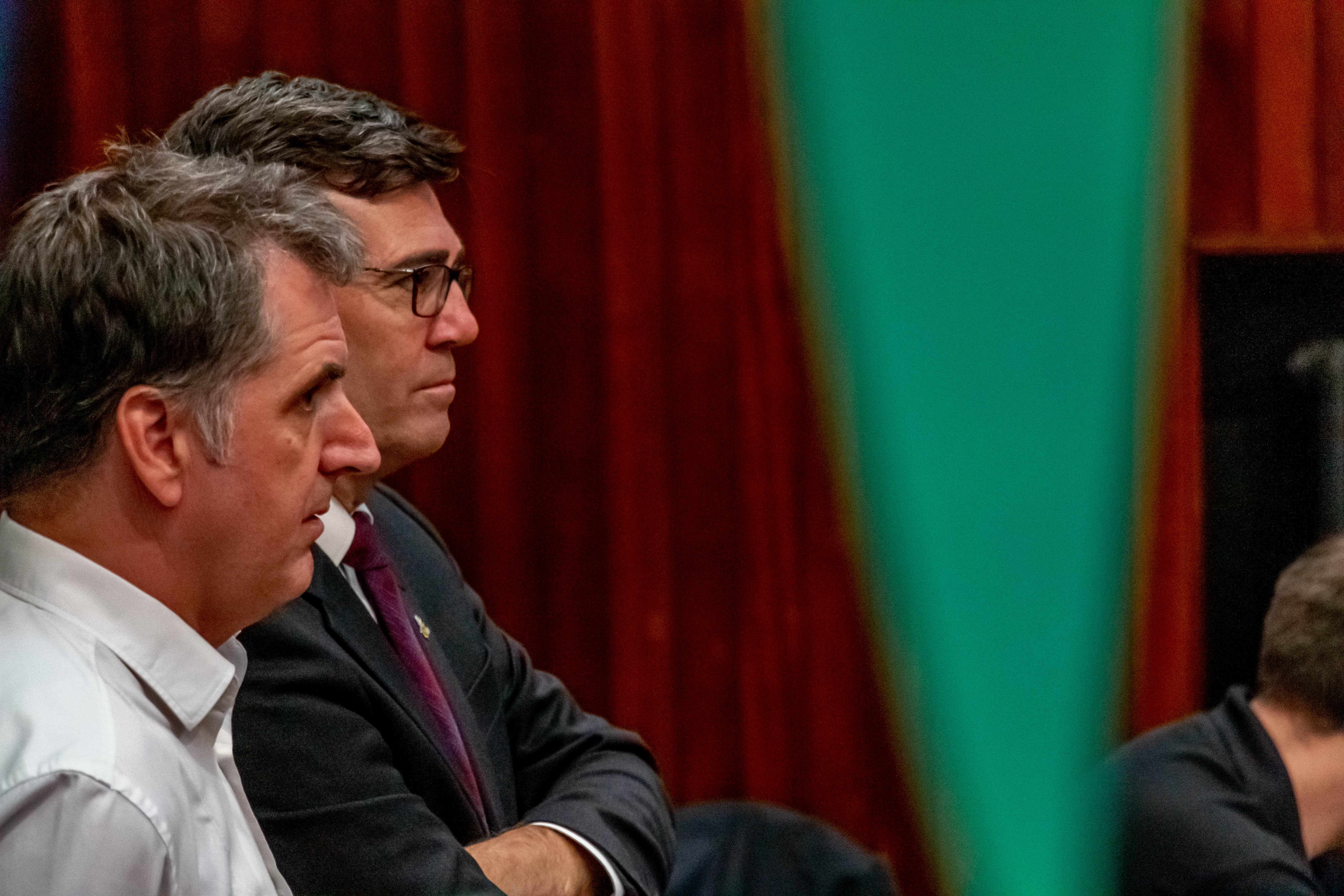 Speakers from Greater Manchester Citizens, Deloitte, Culture Liverpool and the TUC spoke of their relationships to economic justice, including Claire Dove OBE, Member of the Commission on Economic Justice. The panel also responded to audience contributions on collective bargaining, discrimination and environmental justice.

In July, Liam Byrne MP opened Economic Justice for the West Midlands by celebrating the region's history of innovation, and echoing the Commission's call for the UK to establish an economic model in place of our current economic muddle. Chaired by the Head of the Centre for Economic Justice Carys Roberts, the panel of campaigners, policy makers and business representatives discussed audience concerns about the rise of the gig economy and the need to drive green innnovation.

For the final event of the summer, First Minister of Wales Mark Drakeford joined us in Cardiff, and set out his aim to build an economy where fairness, equality and justice are hard-wired into decisions through social partnership, collective bargaining and public investment that creates shared value. Watch the speech here. IPPR Director Tom Kibasi chaired the panel with speakers representing groups from across the Welsh economy, including National Black History Coordinator Uzo Iwobi OBE who highlighted the economic opportunities to be gained from integrating BAME communities into the labour market.

Read the economic analysis we handed out at the events: 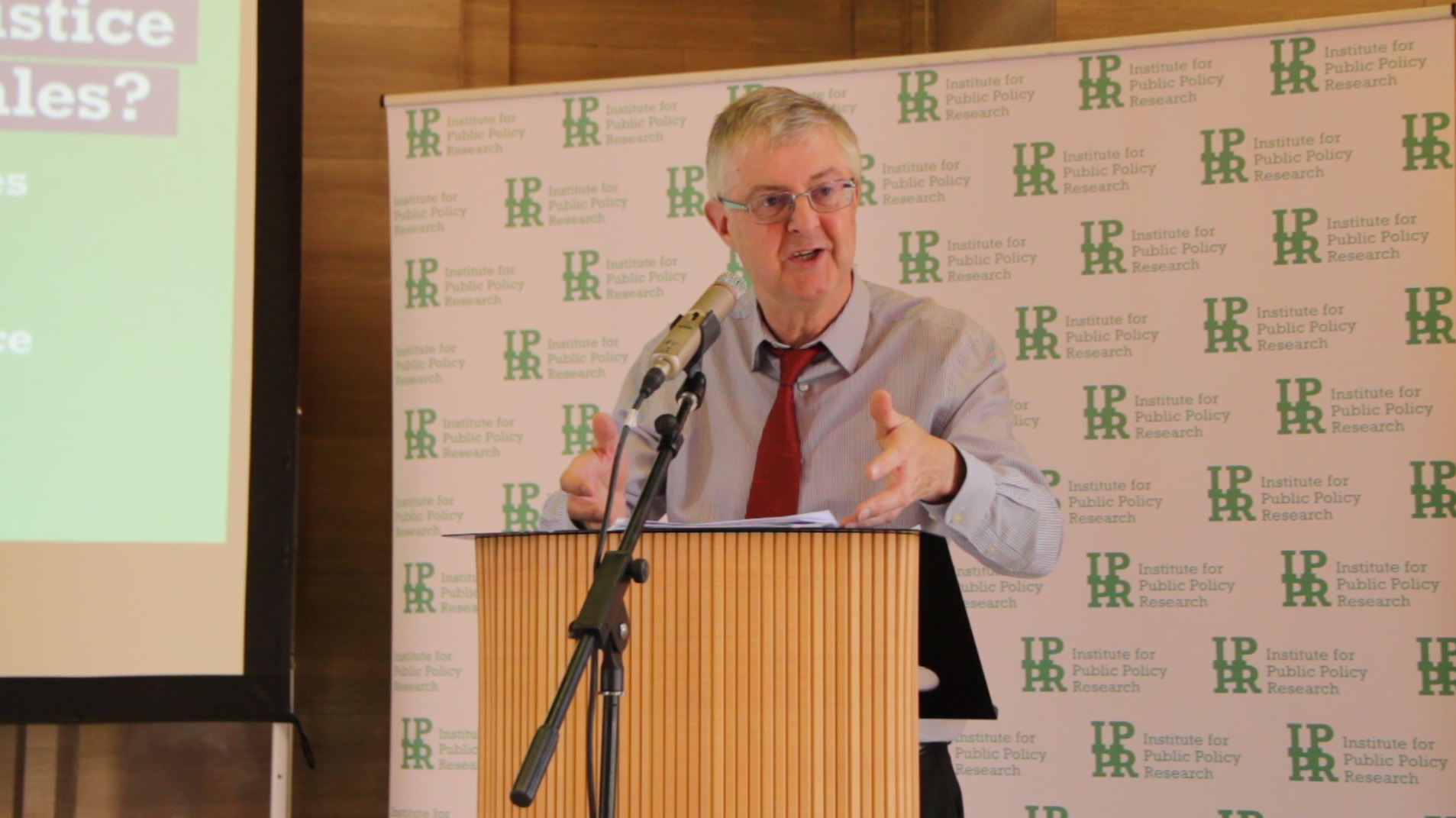 In November the roadshow rolled into Exeter for the fifth event in the series, where we we were joined by local council leader Cllr Phil Bialyk and speakers from community businesses, local charities and environmental groups, as well as 70 local people, from A-level students to entrepreneurs, community leaders and pensioners.

We ended 2019 in Peckham, South London for a participative economic justice assembly, held in partnership with the London Plus Good Work Commission. The event followed the structure of a citizens' assembly and brought members of the local community together to discuss policy ideas around good work, good pay and good lives.

The roadshow kicked off 2020 in Edinburgh, with a sold out event and keynote speech from First Minister Nicola Sturgeon, chaired by IPPR Scotland Director Russell Gunson. The First Minister spoke of the Scottish government's plans for a just Scottish economy, from the National Investment Bank to implementing new measures of economic success. You can watch the full speech here. IPPR's Carys Roberts also hosted a panel from civil society, academia and community organisations, including Mary Senior, Scotland Official for UCU and a Member of the Commission on Economic Justice. 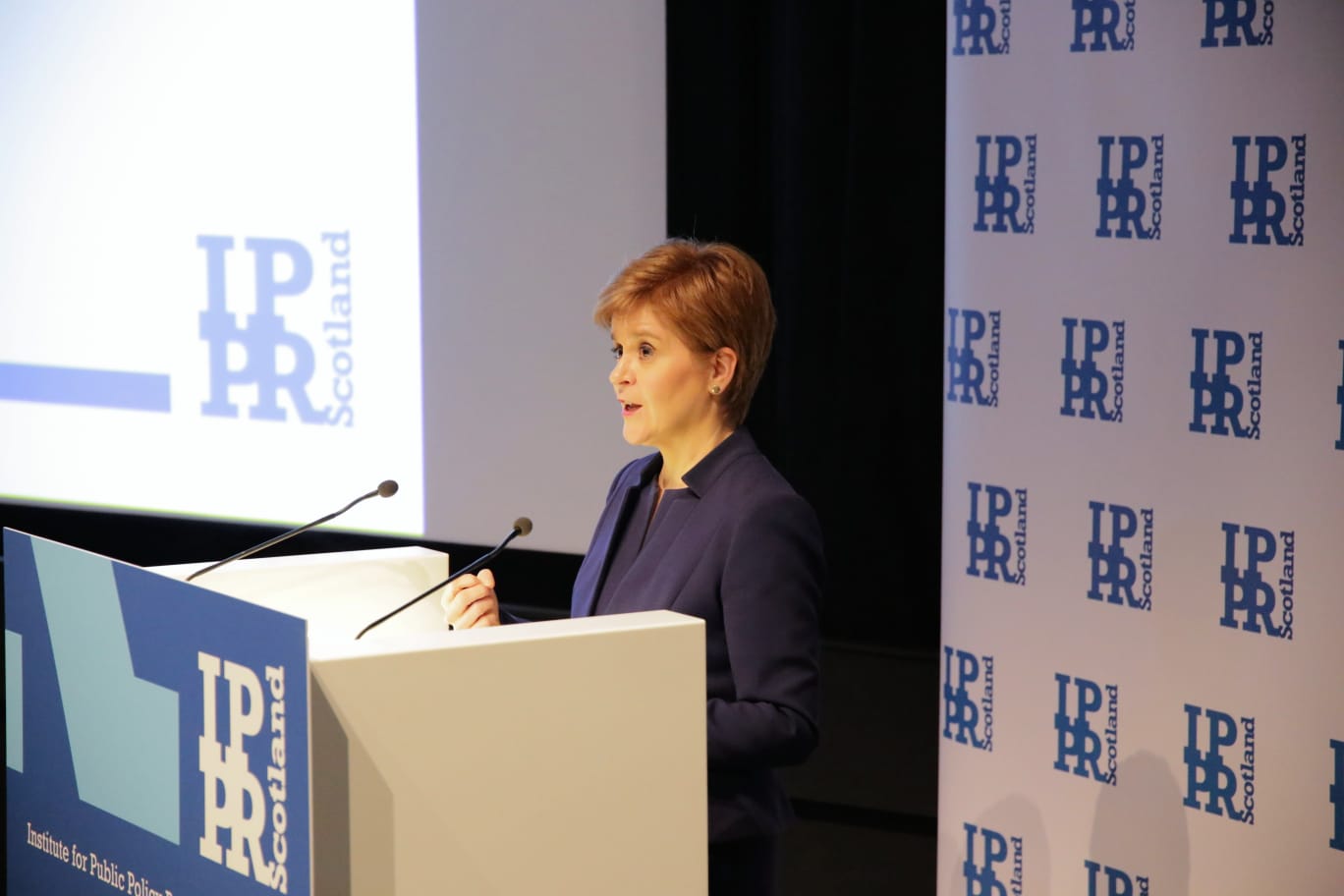 In January we celebrated the milestone of bringing people together in all four nations of the UK, with the penultimate event in Belfast. We welcomed people from across the city and beyond to The Duncairn community arts centre for an evening of discussion about issues and opportunities in Northern Ireland, from low-paid work and barriers for disabled workers, to green investment and responsible business action. Speakers included the founder of a local cleaning co-operative and Grainia Long, Commissioner for Resilience for Belfast City Council.

For the eigth and final location in the series, almost 100 passionate local residents came to the historic Margate Winter Gardens to discuss how to make the most of investment and growth in the area. Newly appointed Executive Director Carys Roberts facilitated group discussions and audience contributions, chairing the panel of speakers which included a social enterprise founder, an anti-discrimination charity leader and Alison Suttie, local resident and Liberal Democrat Member of the House of Lords. It was a fantastic final stop in the tour, with a diverse audience of artists, GPs, youth workers and business owners coming together to talk about what a just economy would look like to them, and what they can do to make this a reality. 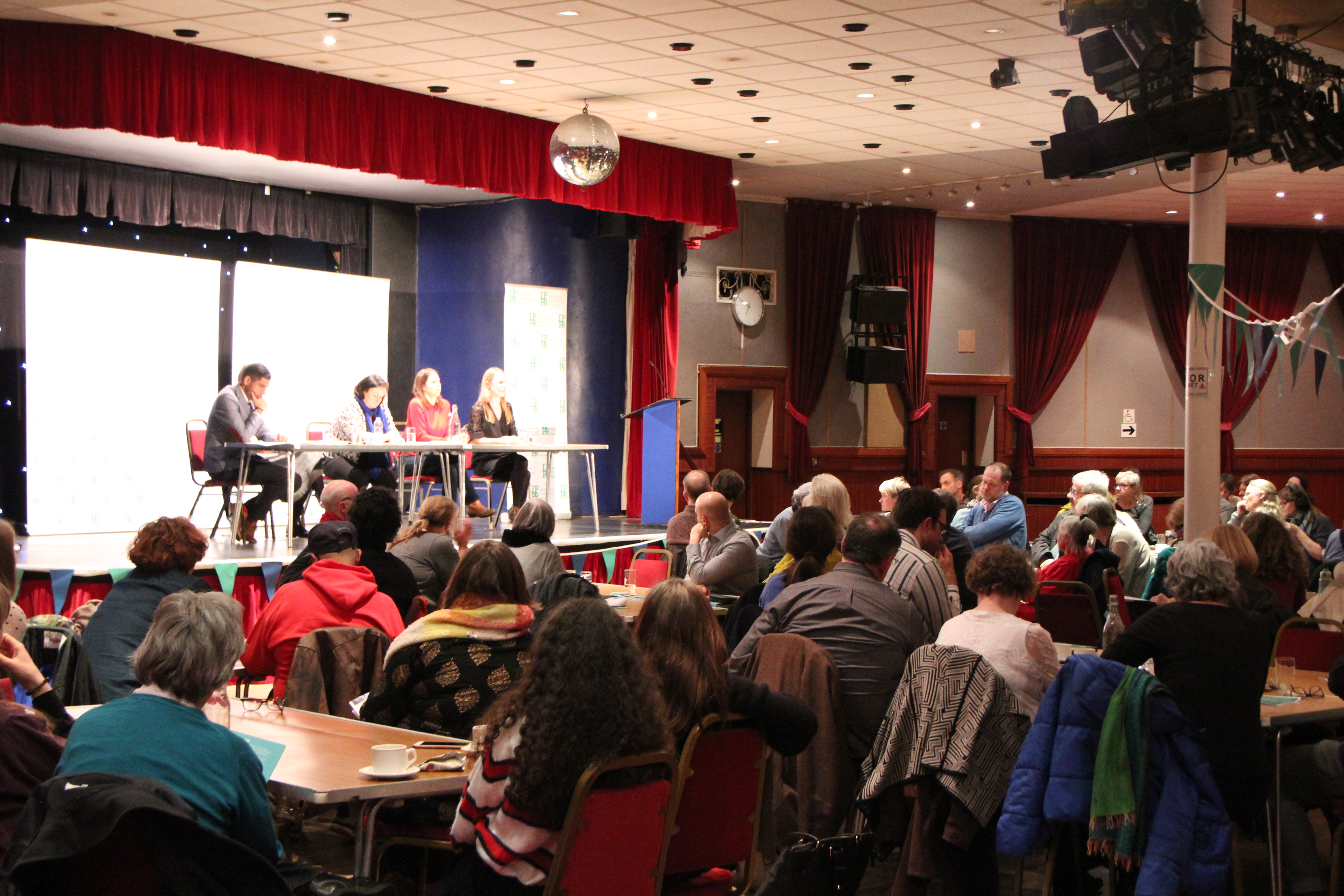 This series of events was generously supported by the Friends Provident Foundation.