The depth and duration of the economic crisis faced by western countries has led to a renewed focus on the core institutional structures of their economies. In the typologies of political economists, Britain is ordinarily grouped with the deregulated market economies of the Anglosphere, with the coordinated economies of central (Christian democratic) and northern (social democratic) Europe forming the other main groups. Recently, scholars have argued that these economies have shared a common vector of liberalisation, suggesting convergence on a new, global and more inegalitarian norm. The crisis has not reversed this trajectory; instead, we appear to be witnessing the 'strange non-death of neoliberalism', as Colin Crouch has put it. Citizens know that they live in a kind of 'post-democracy', because the state is structurally constrained from responding to their concerns by the dominance of financial markets and the lingering fiscal crisis.

David Runciman's acute account of the crisis in British democracy sets out how the elites leading our major institutions have all been found out – found to have been running cosy clubs which have lost trust and, most importantly, their ability to function effectively. In Runciman's view, the growth in inequality in Britain from the 1980s onwards gave rise to pockets of privilege in which elites colluded in lax scrutiny of each other. When the economic crisis struck, they became a joint liability. Institutions that should have been holding each other to account – from Parliament to the police, banking to the BBC – instead simultaneously lost legitimacy and public confidence. The resulting malaise has left them incapable of tackling Britain's underlying crisis of managerial politics. Instead of democratic renewal, we remain stuck in a perpetual present of scandal and mistrust – not so much back to the future as going nowhere fast.

The facts of political inequality and the failing health of political parties across Europe are too stark to dismiss or to solve with the usual exhortations to voter education and mobilisation. We are a long way beyond that stage. Instead, we must become 'disillusioned with disillusionment', as the theorist Roberto Unger put it on a recent trip to the UK, and begin the long work of the institutional reinvention of our economy and polity.

Read more: Editorial: Institutional reinvention in our economy and polity 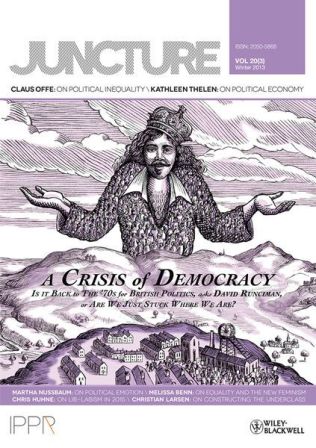