'I do not see class as a "structure" nor even as a "category", but as something which in fact happens (and can be shown to have happened) in human relationships.' These words were penned 50 years ago, by social historian EP Thompson, but this democratic insistence on the centrality of human agency and social relationships is strikingly resonant for contemporary political debates. In this edition of Juncture, we seek to bring together some of these concerns as they are expressed in contemporary egalitarian thinking, along two major axes: the theory of equality and the theory of the state (and its close cousin, public service reform).

The revival of active and democratic accounts of equality is represented by its leading proponents in the Anglophone and Francophone worlds, Elizabeth Anderson and Pierre Rosanvallon. Each, in their different ways, has sought to advance the theory of equality beyond a singular, distributional definition. Like Thompson, Anderson grounds her relational egalitarianism in the lived struggles for recognition of disadvantaged and stigmatised groups. Her central argument – that equality is not the distribution of a particular thing but a property of social relations – does not diminish the necessity of reducing vast disparities of income and wealth, but grounds egalitarianism in a richer, and more historically and pragmatically rooted set of arguments and ambitions. Likewise, Rosanvallon traces the lineage of egalitarian ideals back to their revolutionary origins, but seeks to reframe the argument for social equality in terms that make sense in an age of individuals not collectivities.

In contrast to egalitarian political theory – in which there have been very active and lively debates – the theory of the state has remained relatively undeveloped on the left in recent years. There are obvious reasons for addressing that lacuna today.

Rick Muir outlines what he and others have termed the 'relational state'. This approach starts from the limitations of both marketised and bureaucratised forms of public administration, recognising in particular the limits of the thin liberalism of new public management and markets of choice. Relational reform, Muir argues, promises better outcomes for dealing with complex problems like long-term unemployment and antisocial behaviour, by giving people consistent, coordinated support, rather than passing them between caseworkers and service providers. In a similar vein, Liz Kendall argues for a shift of power out from Whitehall departments and down to citizens and the users of services.

We argue that there is enough common ground in these approaches to characterise them as a 'relational turn' in contemporary left thought. If that is so, the programmatic task that follows is to consider their implications, not just for public policy, but also for politics: to what, for EP Thompson, was the making of history. 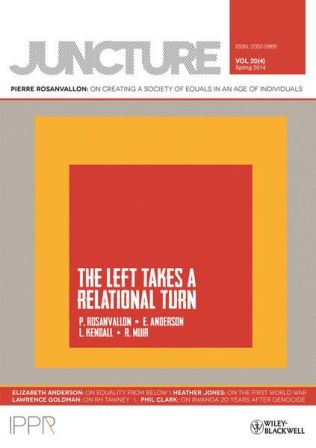