Amid all the debate provoked by Thomas Piketty and his chart-topping work, arguably one of its most important legacies will be his reassertion of the political economy tradition. Recognising this flush of inspiration and interest, we have focused this edition of Juncture on the big questions of political economy for the centre-left, in Britain and internationally.

The term 'political economy' was widely used in the 18th and 19th centuries to describe the study of how economic systems were politically organised and structured in different jurisdictions. It went out of fashion in the 20th century but has experienced a revival in recent decades. It is particularly pertinent to traversing the post-crash landscape of the US and European economies where – despite the depth of the financial crisis, the sluggish pace of the recovery, the overhang of debt, lower living standards and distributional disputes – the grip of orthodox market economics on policymakers appears as firm as ever.

As Eric Beinhocker and Nick Hanauer explain, 'traditional economic orthodoxy assumes that markets are efficient, people are rational, and economies naturally move to an optimal state. But we now understand that markets can be far from efficient, people are not always rational, and the economy is a complex, dynamic, evolutionary problem-solving system – more like an interdependent ecosystem than an efficient machine " This 21st-century way to understand economics allows us to understand capitalism as an evolutionary problem-solving system. It allows us to see that the solutions capitalism produces are what create real prosperity in people's lives, and the rate at which we create solutions is true economic growth. This perspective also allows us to see that good moral choices will be the ones that create true prosperity.'

The runaway success of Piketty's book, Capital in the Twenty-First Century, attests to a public appetite for understanding these 'good moral choices' and the causes and consequences of the rise in inequality that has taken place since the late 1970s in Europe and the US, with such destabilising and disfiguring effects.

The recent surge in populist forces in Europe – driven by economic as well as cultural anxieties – gives urgency to the task of constructing political coalitions for economic reform. These can no longer rest on an organised working class, as they did in the postwar era, but will need to be assembled from a range of sources, such as the progressive business community, green movements, social campaigns for better wages and working conditions, and citizens mobilised outside of political parties as well as within them. Whether such political coalitions can be assembled is a key challenge of our times. 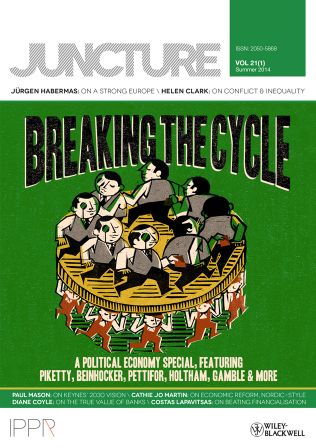