This party conference special of Juncture focuses on the crucial question of political leadership, and whether it is possible to rehabilitate it as an effective force in the face of widespread disaffection with traditional political life. As Max Weber argued, politics is about passion, perspective, and the hard slog of reform. Without passion, it fails to grip. Without perspective, it too often falls prey to counterproductive populism. Without a commitment to undertake the 'slow, strong drilling through hard boards' necessary to achieve change, it is ineffective and eventually leads to alienation. The challenge for leadership, then, is to revive passion, perspective and the capacity of democratic action to achieve change despite the head winds of what Colin Crouch has called an approaching 'post-democratic' age.

Here, Michael Kenny and Nick Pearce argue that political leaders can effectively meet this challenge, but only if they respond to the widely held desire for popular self-government, becoming more pluralistic, democratic and experimental in the process – and all the while resisting the short-term fixes of populism, whatever its guises. Political parties, politicians and civic society, they argue, require greater autonomy and decentralisation, with more routes into political life, if we want a stronger, more representative democracy. David Runciman's essay, meanwhile, explores whether it is the relative lack of stature in today's political class that breeds disaffection. Has the age of political giants passed, as it is sometimes claimed? Or do we in fact need to measure today's politicians against new yardsticks to test for aptitudes that better reflect political realities in 21st-century Britain?

Against this background, how will history judge the leadership of our current prime minister? The historian Anthony Seldon presents his first cut on the Cameron premiership (his fully authorised account will appear next summer). The judgment of history, he contends, will be far less dependent on whether Cameron wins the outright majority in 2015 that so many Tories crave, and which he failed to achieve in 2010, than on Cameron's success at holding the Coalition – and the social fabric of the country – together in profoundly challenging times. Seldon argues that Cameron's skills as a leader were ideally suited to the fudges and compromises of coalition politics. Yet, however at home Cameron is in the land of 'the Quad', he nevertheless failed, Seldon argues, to respond to or take seriously the Ukip threat, with all the dire consequences this has had for Conservative party unity. His leadership attributes are, in other words, too one-dimensional to cope with the multifarious challenges thrown up by the rising tide of anti-politics sentiment that Kenny and Pearce describe.

British politics cannot return to the status quo after the tumultuous events of recent months. The democratic conversation that animated the Scottish referendum must spread to England, Wales and Northern Ireland. Howsoever it is given institutional or political expression, popular and representative engagement in the renewal of our democracy is now imperative. 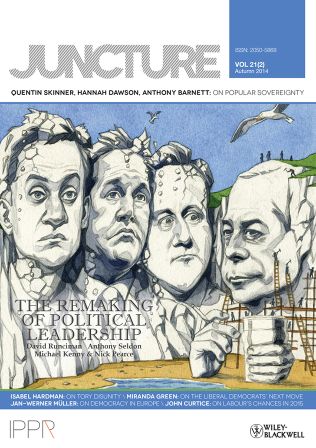