The financial crisis and its aftermath have delivered major shocks to the party systems of continental Europe: witness the rise of new left parties such as Podemos in Spain and Syriza in Greece, and the surge in support for far-right populist parties such as the Sweden Democrats and the Front National in France. Britain's first-past-the-post system has immunised it to these convulsions in the past, but now it too is experiencing a major political recomposition. A new, multiparty system is being created, forged from the twin processes of the secular decline of the main social class voting blocs and the more recent territorial realignment sparked by the rise of civic Scottish nationalism and Eurosceptic Englishness, given expression by the SNP and Ukip respectively.

Are these merely the simulacra of democratic energy, symptoms of the decline of representative democracy rather than signs of its rebirth? Has so much been power been sucked out of national parliaments and popular democratic institutions that we are now living in 'post-democratic' times? Colin Crouch, one of the leading academic voices in this school of thought, opens this edition with an important contribution to debates around the Transatlantic Trade and Investment Partnership (TTIP). Moving beyond arguments over the particulars of the negotiations between the EU and the US, he locates TTIP within the broader concept of a move towards a post-democratic society, in which the formal institutions of democracy survive but, as power migrates to disconnected business and political elites, are no longer a real source of decision-making or the focal point of political dynamism.

On the one hand, Crouch argues that TTIP represents an exemplar of this trend towards post-democracy, as areas of public policy are transferred into trade agreements that are negotiated behind closed doors and made enforceable in tribunals or courts. Yet, on the other, he also posits that attempts to expand this process of commodification into the public sphere and to withdraw economic activity from political steerage will inevitably meet popular resistance. Social forces strike back, albeit often inchoately. In the particular case of TTIP, Crouch argues that civil and political mobilisation might still be capable of shaping a transnational agreement in a way that both expands world trade and protects the integrity of European social welfare institutions. We shall see in the next year whether this opportunity is taken.

Looking back, 2014 has been marked by uncertainty and turbulence: war in Ukraine and the Middle East, economic stagnation in Europe, and health crises in west Africa. Predicting what lies ahead might seem a fool's errand; nonetheless, Juncture is pleased to present 10 predictions for 2015 by leading commentators such as Philippe Legrain, Ann Pettifor, Martin Jacques, Matthew Taylor and Eliane Glaser. The self-destruction of the eurozone and the stagnation of the west are recurrent themes, as is the continued shift of economic and political power to the east. Ranging across the political landscapes of India, China, the EU and Scotland, and asking what forms of technological, ideological and organisational change we should expect over the next 12 months, the collection is an insightful guide to what could lie ahead.

In their different ways, each of our contributions brings political economy – the interpenetration of political and economic institutions – back into focus. Whether in relation to the evolution of the state-directed capitalisms of the east, or the struggle to shape a new post-crash economy in the west, 2015 will be a year in which questions of political economy loom large. 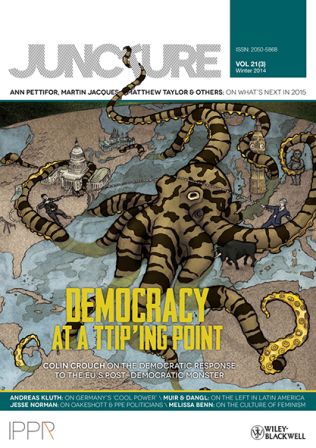