In 1978, Eric Hobsbawm penned his famous lecture, ‘The forward march of labour halted?’ In it, he documented the reasons why the organised working class was no longer marching forward as the collective agent of historical transformation. The Keynesian era was coming to an end, and the Labour movement could not prevent it happening. The following year Margaret Thatcher was elected prime minister and the Labour party began its own long march into the wilderness.

Jeremy Corbyn’s improbable election as the leader of the Labour party has brought the arguments as well as the iconography of that era back into public view. Where it failed to get its own standard-bearer elected to the party leadership back in the tumult of the late 1970s and ’80s, the Bennite left of the Labour has now triumphed, sweeping through the membership, registered supporters and trade union levy-payers of the party to secure an overwhelming victory for Corbyn. He held up a mirror to the party, showing how hollowed out, technocratic and uninspiring it had become – and the mirror shattered.

The Corbyn surge was so rapid, and unexpected, that the Labour party didn’t stop for breath to analyse why it had suffered a second successive – and devastating – election defeat. In a series of careful dissections of the evidence, this edition of Juncture seeks to answer that question. 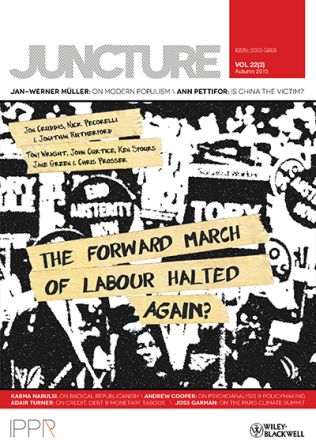