The election result has transformed the UK's political landscape. For the progressive centre-left, it marked a catastrophic defeat of both the liberal and social democratic traditions in this country. For the Conservative victors, it was a victory made sweeter by the fact that few saw it coming. But the new political terrain over which they now preside is littered with many potential pitfalls. The UK's constitutional settlement is buckling and in urgent need of democratic renovation, our relationship with Europe will be tested and potentially remade, and challenging questions of identity, security and place run through our politics. If the country is to navigate its way through intact, it will need to better understand itself and the social, economic and cultural trends that are reshaping our politics and political identities. To that end, this edition of Juncture presents an anatomical examination of the UK today, tracing its vital nerves and arteries, testing its creaky joints. 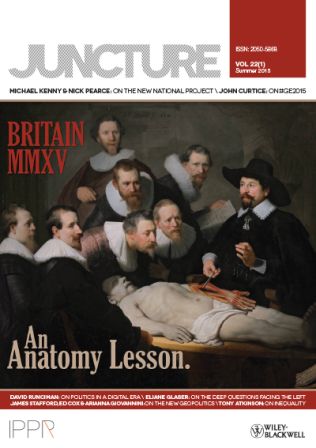