2016 marks two momentous centenaries on the isles of Britain and Ireland: those of the Easter Rising and of the Battle of the Somme. Irish men and women were killed in both, though until recently the Republic of Ireland has only paid homage to those killed in the rising against the British state, not to those who died fighting with the British army in the trenches of the Somme.

As the historian Heather Jones notes in her essay for this edition of Juncture, which marks the centenary of the Easter Rising, paradoxically it will likely prove easier for the Republic of Ireland to commemorate those who fell in the first world war than those who died in the bloody sacrifice of the Dublin insurrection. The Republic’s mainstream parties will not want to alienate their unionist neighbours, nor give political oxygen to Sinn Féin, the only party to contest elections on both sides of the border, which is currently surfing a wave of popular hostility to austerity and its aftermath. Yet although the Republic has long since abandoned its claims to govern the whole of the 32 counties of Ireland, it will still want to honour and cherish deeply, as every generation has done this past century, the memory of those who rose in arms against British rule. Memory and meaning are never more complex in Irish politics than when the legacy of the Rising comes to the fore – not least because the divisions it engendered have structured its politics ever since.

As Colin Kidd points out in his companion piece, national identity and patriotic sentiment remain potent political forces in contemporary politics. The left ignores this at its peril, as the surge in Scottish nationalism and the collapse in support for Labour north of the border has demonstrated in recent years. Neither class reductionism nor global cosmopolitanism can account for why national belonging continues to inspire political loyalties and exert power over political formations. 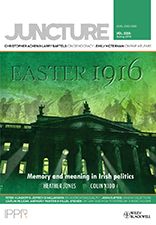