While today's political situation is incredibly volatile in many ways, there is really only one topic at the root of everything: Brexit. In this edition of Juncture, a number of leading thinkers give us their view on what it all means, what the future holds and what we do now.

Is Brexit, as David Runciman argues, a reaction against the ‘networked society’ of the 21st century?

Read more: A win for 'proper people'? Brexit as a rejection of the networked world

Does it, as Vernon Bogdanor believes, present an opportunity for social democrats to renew their relationship with the working class, invest in under-resourced areas and finally pursue electoral reform.

Read more: Not the end, my friend: Labour, the referendum and the challenges that remain

Can it be thought of, as Tom Kibasi writes, as a response to the ever-growing gap between our reality and our expectations – a gap that must be closed in what will be the new ‘Battle for Britain’.

Read more: Understanding Brexit: Why does it feel like this and where do we go from here?

This issue also considers the Labour party’s current woes, as the fallout of the Brexit vote continues to put the party in its worst existential crisis in decades. John Curtice demonstrates that while Corbyn’s campaigning may have been lacklustre, the split between the Remain-supporting middle class and the Leave-supporting working class runs much deeper than any issues with his leadership. It is this that is at the heart of Labour’s wider troubles.
Katherine Perera, meanwhile, argues that the community organising model must be be at the heart of any sucessful renewal of the party, as a ‘means to channel expressive demand into political action’. It will be in finding a way of reconciling the new and old politics that will give Labour a way out of their malaise.

The reconciliation of old and new is an urgent matter for progressive politicians more generally: they are, Gavin Kelly and Nick Pearce argue, in danger of focusing too exclusively on the problems of the present, and in doing so neglecting their understanding of the trends that are shaping the future. Without the latter, they say, progressive politics will fail. 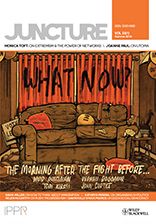