So who had cause to celebrate in 2016? Certainly not the global centre-left, which has suffered a year of disastrous defeats – from the impeachment of the Brazilian president to the resignation of Matteo Renzi, via losses in the US, Australia, the UK, Spain and elsewhere. Trump’s election in November 2016 consolidated a global shift towards conservative nationalism, and we can be certain that he will use the Republican domination of congress and the power of executive appointment to roll back on many of President Obama’s achievements.

That being the case, how will history judge Obama?

In his grace, temperament and intelligence, he will surely be missed. As Jedediah Purdy argues in our collection reflecting on his presidency, Obama is the exemplar of an American tradition – of liberal constitutionalism mixed with a belief in national perfectibility – that, while imperfect, is a vital and progressive tradition nevertheless.

Similarly, as the moral philosopher Elizabeth Anderson sets out, he has advanced the most consequential progressive domestic policy agenda since Lyndon Johnson. From his stimulus agenda to Obamacare, from banking reform and improvements in labour rights to radical improvements in climate change policy both domestic and international, his presidency was the high-water mark of American liberalism. While that is now under threat, it nonetheless attests to the potential to improve, albeit incrementally and imperfectly, the American experiment. Hope was matched by achievement.

Moreover, as Richard Yeselson of Dissent argues in these pages, his presidency provided the breathing space that was needed to allow a flourishing of social and economic movements, from Black Lives Matter to the ‘Fight for $15 [per hour wages]’ movement, that will likely come to the fore in the years ahead, as a disorientated Democratic party searches for means of renewing itself. With Trump threatening to entirely expunge his legislative and executive record, while taking command of a lethal and secretive security state apparatus that Obama expanded, perhaps Obama’s greatest legacy will be a vision of American principles – rooted in justice, fairness and solidarity – that will continue to serve as inspiration to many.

Domestically, the challenge of Brexit looms large. From the politics of migration, to the health of the economy and the state of progressive politics, the aftershocks of 23 June 2016 will radically reshape and disrupt the UK’s political-economic order in the years ahead. In the opening months of 2017, though, the end of Obama’s presidency and the inauguration of Trump’s will be the signal political event. It will be a stark about-turn, from Philip Roth’s ‘American pastoral’ into ‘everything that is its antithesis and its enemy, into the fury, the violence’ of the ‘indigenous American berserk’. The republic will endure Trump’s tenure – but in what shape, and with what consequences for the world? 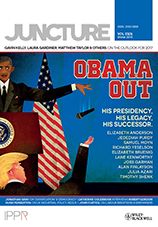