Revealed: £8bn hit to UK prosperity as long-Covid and illness drives 400,000 more people from the workforce

A new IPPR report, published to mark the launch of a new Commission on Health and Prosperity, warns that the UK’s deep health inequalities and ineffective policies mean people are living shorter lives, with more years spent in poor health, and face greater barriers to staying in and getting on at work.

New IPPR analysis shows that there are now more than a million workers missing from the workforce compared to the pre-pandemic trend and about 400,000 of these are no longer working because of health factors, such as long Covid, disruption to health care and declining mental health. Unresolved, this will drag down economic activity this year by an estimated £8 billion, the researchers warn.

The report shows that the relationship between health and the economy goes much further than just keeping workers away from their jobs, it is also a decisive factor in the UK’s terminally low productivity, low growth, and vast regional inequalities.

New analysis by IPPR and leading health analytics company Lane, Clark & Peacock (LCP) shows that health and the economy are two sides of the same coin:

To remedy this injustice, IPPR calls for a new post-pandemic approach to the nation’s health to ensure people can enjoy living healthy lives longer and to heal the nation’s fractured and anaemic economy. The think tank is launching a new cross-party Health and Prosperity Commission to explore how good health can be the foundation for a fair and prosperous economy.

The researchers argue that for too long politicians have treated spending on health as a cost to be contained, rather than as a keystone of a thriving, prosperous economy.

The UK’s poor health outcomes and unequal stagnant economy are not inevitable, or the result of anything innate about the country or its people, but the result of policy choices, according to IPPR. Policy makers must now set about putting the building blocks of good health in place - good work, quality housing, local public health services, a well-funded and staffed NHS - to improve people’s lives and wellbeing, and to unlock the UK’s full economic potential.

The IPPR Health and Prosperity Commission, chaired by leading surgeon Lord Ara Darzi and former chief medical officer Dame Sally Davies, will now work for two years to better understand the interconnections between health and the economy and to set out a blueprint to harness the full potential of better health for all. Other members of the cross-party commission include Greater Manchester Mayor Andy Burnham and former chancellor of the Duchy of Lancaster Sir Oliver Letwin, along with senior figures from health, business, economics, and trade unions (full list of commissioners in notes).

“A fairer country is a healthier one, and a healthier country is a more prosperous one. While the restrictions have eased, the scars of the pandemic still remain deep on the nation’s health and our economy. Not only are we facing a severe cost of living crisis, driven in part by pandemic induced inflation, we’re also experiencing a workforce shortage driven by poor health that’s holding back the economy. It has never been more important to put good health at the heart of our society and economy – and our commission will bring forward a plan to do just that.”

Lord Ara Darzi, a leading surgeon, independent peer and co-chair of the Commission on Health and Prosperity, said:

“As we begin to emerge from the pandemic, we find ourselves at a crossroads. We can continue with a trajectory of poor health, low public investment, and poor growth. Or we can commit to driving a rapid improvement in total health and, in turn, leverage that health for greater prosperity and security. The commission will represent a broad coalition from health and care sector leaders, to economists, business leaders, politicians and scientists to demonstrate the wellbeing and massive economic benefits of better health for all.”

Chris Thomas, head of the Commission on Health and Prosperity, said:

“As the government moves to a ‘living with Covid’ strategy, politicians must not forget how intrinsically linked our health is to our economic fortunes. Policymakers can take immediate steps to make it easier for people dealing with long-Covid and other health complications back to work, but they must also take decisive action to improve our health overall and tackle our nation’s burning health and economic inequalities. An unthinking return to the status quo would be a grotesque injustice to all who have lost their lives and livelihoods. We must build back better.”

Andy Burnham, Mayor of Greater Manchester and member of the Commission on Health and Prosperity, said:

“Good health is at the heart of a just society. One of the fundamental beliefs of the British public is that everyone should have access to good health, irrespective of their means and location. But currently we see grave inequalities in health and opportunity across the country. Good health must be built into all the places people live across the whole country and communities must be supported to take greater control of their health and wellbeing. By doing this health can be the foundation of a just and equal economy.”

Sir Oliver Letwin, former cabinet member and member of the Commission on Health and Prosperity, said:

“Historically, Britain has succeeded economically when it has combined innovative technology with improvements in public health. The Victorians made huge investments in sanitation and public health partly as a way of promoting social justice, but also as a way of boosting productivity. It is time to rekindle that spirit and deliver a new era of better health, greater health equality and greater prosperity.”

IPPR experts are available for interview on request 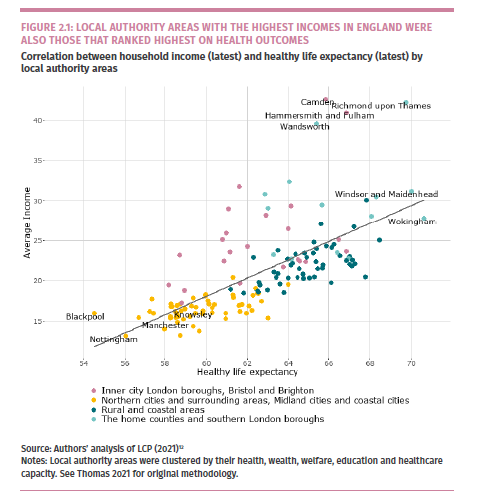