Analysis from the north of England’s leading think tank shows that if the North had received the same transport investment as London over the last decade, it would have received £86bn more

Independent analysis of past transport spending published today by IPPR North shows that between 2009/10-2019/20, the North received just £349 per person in transport spending. For context, the UK overall received £430 per person, and London received £864 per person. This news comes on the same day that the Integrated Rail Plan has been published and reveals the true extent of broken promises to the people of the North over many years.

The independent analysis of treasury data shows that if the North had received the same per person spending as the capital, it would have received £86 billion more. This amount is higher than Transport for the North’s 30-year £70 billion transport investment plan, which they say could create 850,000 extra jobs and unlock potential in the North’s economy by £3.4 billion GVA per annum.

The East Midlands and South West have also experienced significant underinvestment with just £258 and £270 spent per person over the same period. Within the North, the North East saw the lowest transport spending, receiving an average of just £310 per person over the decade. Yorkshire and the Humber received £328 and the North West £379.

Meanwhile, if the North had received the same transport investment as the London since the Northern Powerhouse agenda – widely considered the precursor to the levelling up agenda - was launched in 2014/15, it would have received £51 billion more. Meanwhile, the IRP contains £56 billion already earmarked for HS2, leaving only £40 billion to be split between the North and Midlands, and much of that being scaled back longstanding promises rather than new. Therefore, researchers at IPPR North say the evidence shows that during the Northern Powerhouse and Levelling Up period, “the only thing that ‘levelled up’ was the transport investment gap” which has gone from £451 per person in 2014/15 to £523 in 2019/20.

“The Integrated Rail Plan appears to be a levelling down of government’s commitment to the North. Not only does it break the Prime Minister’s own promises and his manifesto pledges, but it also breaks many years' worth of plans and assurances to the north of England.

“The North is now reliant on creaking Victorian infrastructure that undermines its economy, its people’s quality of life and its ability to reduce emissions. A good transport network requires both strong strategic national rail links and high-quality local transport, the North shouldn’t have to take one or the other. It is time for a U-turn. Nothing else will do. Government must commit to delivering Northern Powerhouse Rail, HS2’s Eastern Leg, and local transport improvements, or face the anger of a betrayed North.”

“Today’s analysis is staggering, an £86bn investment gap is a political choice and central government has deliberately chosen this path. It is one that has benefitted nobody, anywhere in the country. To be clear: Londoners absolutely deserve investment – but northerners who have been short-changed for decades simply deserve those same levels of investment too.

“In reality, the only thing that ‘levelled up’ since the Northern Powerhouse and Levelling Up rhetoric began, is the transport investment gap. This story is becoming far too familiar and prevents regions like the North from realising their potential. It’s time for a U-turn.”

IPPR North is the leading think-tank for the north of England, developing bold ideas for a stronger economy and prosperous places and people. It was shortlisted in two categories for Prospect’s ‘think tank of the year awards’ in 2020. For more information, visit ippr.org/north.

IPPR North analysis of historic total public spending on transport per head-including capital and current spending, and from central and local government (private spending not included), in real terms for 2019/20 prices 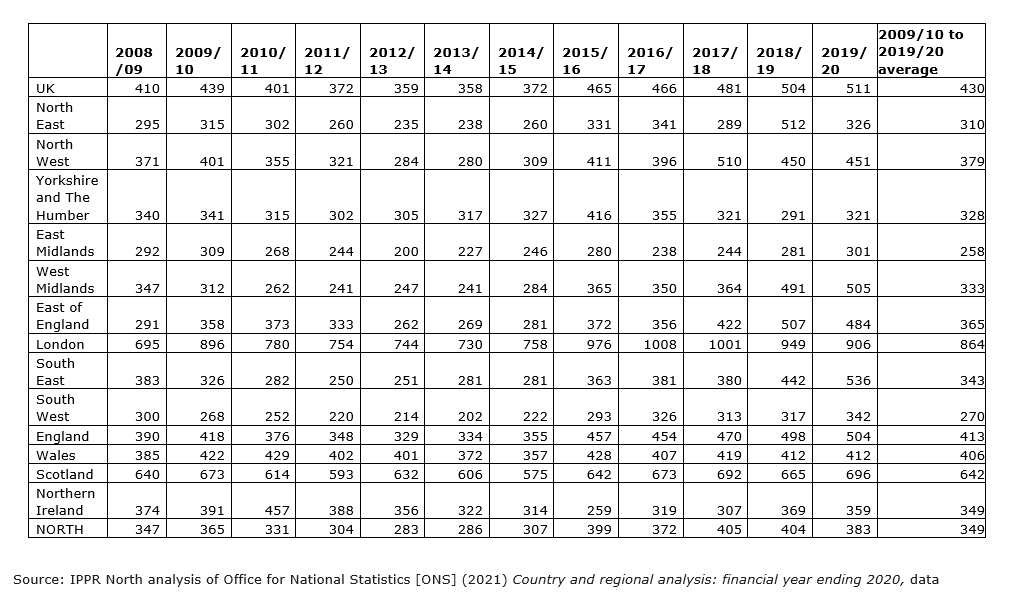 Today’s analysis uses ONS statistics which are based on HM Treasury’s spending records (ONS 2021) to analyse historic expenditure on transport. This analysis includes public spending only and captures both revenue and capital spending by central and local government.