Britain wants you! Why the UK should commit to increasing international student numbers

How can cutting net migration be squared with strengthening the UK's position as a leading destination for international students? This report reviews the effects of the Coalition government's policies on the international student visa regime and their wider impact on the education sector, sets out the best available data and evidence on student migration to the UK, and recommends more effective approaches to growing and overseeing our international education sector.

The Home Office's net migration target has created a perverse incentive for the government to reduce the number of international students - officially counted as 'migrants' if they stay for over a year - in order to achieve an overall reduction in migrant numbers. By contrast, the Department for Business, Innovation and Skills (BIS) is promoting growth in the international education sector, whose exports are estimated to be worth £17.5 billion to the UK economy - BIS anticipates that numbers of international students in higher education will grow by 15-20 per cent over the next five years. The Coalition's policies are not only confusing and incompatible, but are harming the UK's economy.

The UK needs a student visa regime that clamps down on abuse - but also one that is open and flexible enough to attract foreign students in a competitive global market. Above all, the government needs to unequivocally commit to increasing the number of international students studying at British education institutions.

This report outlines the Coalition government's approach to policy on international students, provides an overview of the recent data and trends, and draws together research that illustrates the impact of international students and policy on the national economy, local areas, and institutions in different parts of the education sector. It charts the sector's future prospects based on current trends, explores examples of successful policy in other countries, and also includes detailed case studies - including original polling of the perceptions of Indian nationals who are considering studying overseas.

Its key recommendations include:

Analysis of polling data shows that when it comes to guessing who makes up the immigrant population, public perception differs widely from reality. 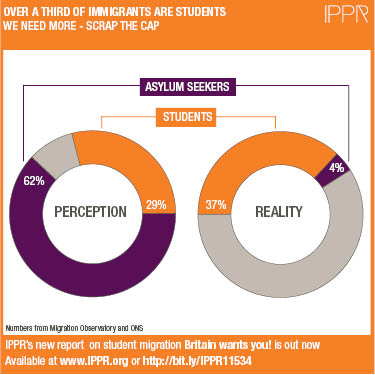 UK should be welcoming foreign students, not turning them away

Number of overseas students falls by a third

Immigration stats are bad news for the Government, but worse news for Britain

Not intelligent to clamp down on foreign students

Are pig trotters the best we have to offer China?