The coming Brexit negotiations will likely centre on the trade-off between access to the single market and controlling EU migration. Achieving a compromise – by putting some limits on free movement and some limits on single market access – will be difficult, but nevertheless it will be a key priority for the UK in the negotiations. This new briefing paper, part of IPPR's new 'Progressive Brexit' programme of work, identifies and explores the six main options on free movement that the UK government could pursue.

In the aftermath of the vote for Brexit, the UK government now faces a profound challenge in securing a new trading arrangement with the EU. The EU has made it clear that the UK cannot have comprehensive single market access without retaining the free movement of people. The greatest difficulty for the UK in the forthcoming Brexit trade negotiations will be the problem of how to find a compromise between protecting the UK economy by securing single market access on the one hand, and responding to public concerns about immigration by changing the current free movement rules on the other – assuming, of course, that such a compromise will be possible.

At this point we cannot know precisely what trade-offs between migration policy and market access the UK will actually be able to make – they will depend on a process of diplomatic negotiation between the UK and the EU. However, progressive policymakers and thinkers need to work out which trade-offs they think would be better than others – and they need to do it soon. Only then can they work out what they think the UK’s approach to the negotiations should be.

To help policymakers and thinkers to do that, IPPR has produced two briefing papers. This briefing covers possible options for EU migration. The other covers options for access to the single market (other than the free movement of people).

These briefings are of course not unique – other organisations have published similar products. However, we hope these are somewhat broader in scope.

That is not to say that our two briefings are exhaustive, either – for both migration policy and single market access, there are almost infinite spectrums of options – but we have tried to set out what we think are the key options.

Our consideration of the impacts and implications that each option would have for key areas of policy and the UK economy is informed by two principles that, we believe, should be central to the process of negotiating access to the single market:

These briefings do not take a view on which option or options the UK should pursue – they simply set out the pros and cons. We have set out IPPR’s initial views on the best options in a separate blog.

This briefing explores some of the options available to the government on EU migration policy as it enters the Brexit negotiations. Our focus is on the arrangements for future prospective EU migrants, rather than EU nationals already in the UK. We assess six different options and discuss how the EU might respond in the negotiations. There is of course no guarantee that a compromise between the UK and the EU is possible – but the options set out here comprise some of the most plausible scenarios for EU migration that the UK could discuss with the EU as part of the Brexit negotiations.

The forthcoming Brexit negotiations are likely to centre on the trade-off between access to the single market and controlling EU migration. EU leaders have said that once the UK leaves the EU it must uphold free movement of people in order to retain full access to the single market. Achieving a compromise – by putting some limits on free movement and some limits on single market access – will be difficult, but it will nevertheless be a key priority for the UK in the negotiations. This briefing identifies six main options on free movement that the UK government could now pursue.

We then assess the six options using five different criteria:

Table A.2
Summary of key pros and cons, against key criteria (and likely trade-offs in terms of trade) of each option 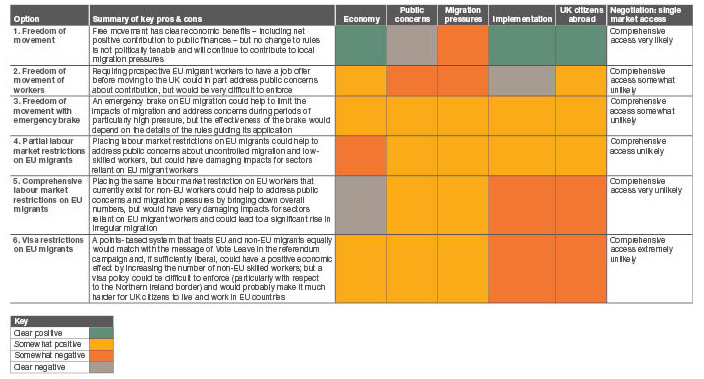 What new deal should we strike with the EU?