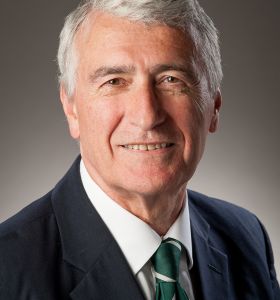 John Eatwell is president of Queens’ College, and emeritus professor of financial policy, University of Cambridge.

From 1985 to 1992 John Eatwell served as economic adviser to Neil Kinnock, leader of the British Labour Party. In 1992 he entered the House of Lords, and from 1993 to 1997 was Principal Opposition Spokesman on Treasury and Economic Affairs, a position he resumed from 2010-13. He has been a teaching fellow at Harvard University and a visiting professor at Columbia University, the University of Massachusetts at Amherst and the University of Amsterdam. In 1988 he, with others, set up the Institute for Public Policy Research, one of Britain’s leading policy think-tanks. He was a member of the Board of the Securities and Futures Authority, 1997-2001, and of the Regulatory Decisions Committee of the Financial Services Authority from 2001 until 2006. He is Chairman of the Jersey Financial Services Commission. Currently, he is an adviser to E.M. Warburg Pincus & Co. International Ltd., to Palamon Capital Partners, LLP and is chairman of the Royal Opera House Pension Fund.

Not "Just Another Accession". The political economy of EU enlargement to the East

Transformation and Integration Shaping the future of Central and Eastern Europe