A new joint report from the IPPR and Common Wealth think tanks has today revealed the scale of the cash crisis facing the UK’s businesses – big and small alike. The report urges the government to step in and take public stakes in firms likely to be viable post-pandemic.

New Bank of England data reveals businesses across the UK are facing a £180 billion cash shortfall this year. With just £90 billion in cash reserves, firms are facing at least a £90 billion remaining cashflow gap this year due to the pandemic, even considering existing government support schemes.

This shortfall in cash would mean many firms, including major employers and industries, struggle to pay debts, salaries and other operating costs, according to the think tanks. 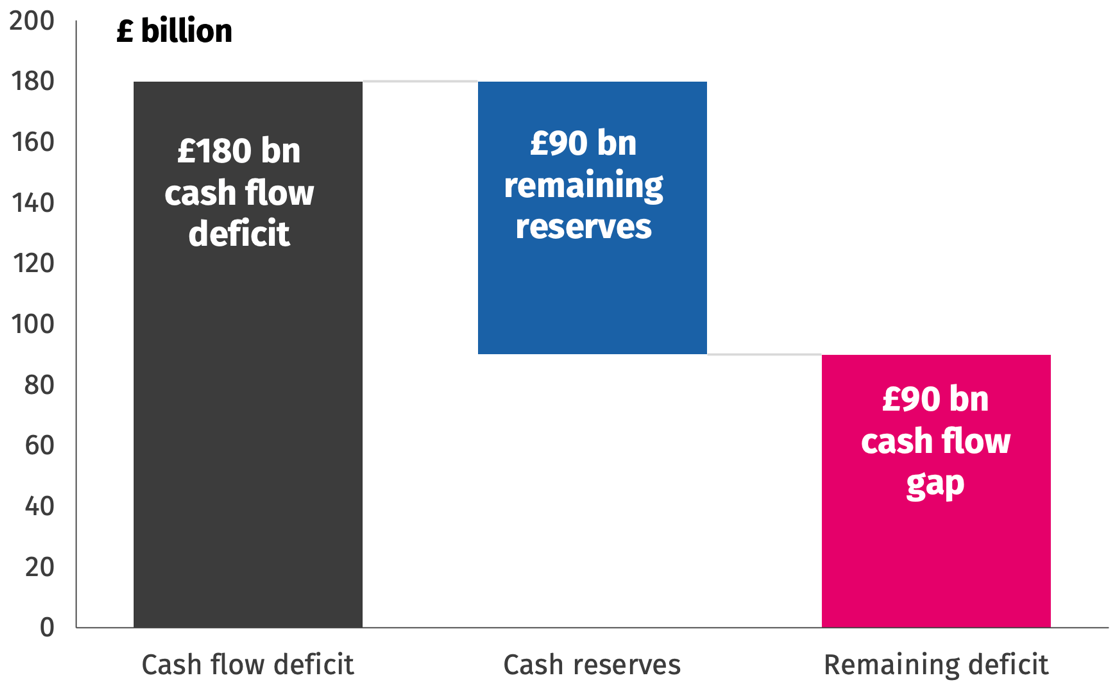 IPPR and Common Wealth warn that with a fifth of firms having seen their turnover drop by more than 50 per cent as of November, firms facing dwindling cash reserves and a disrupted Christmas trading period, this cash gap could force many viable businesses to collapse.

By the 15th November this year, 1.5 million firms have been granted loans through government or government-backed schemes to a value of £66.4 billion, Treasury data reveals. But some firms have already hit their borrowing limits under these support schemes and barely any equity support has been extended, according to the report.

While recognising the important action already taken by the government to support firms and jobs, the report argues that too much emphasis has been put on debt as a way of supporting businesses hit by the pandemic. Crucially, these schemes won’t prevent firms collapsing, the report says.

The think tanks argue that firms that could be viable post-pandemic should be saved from going into liquidation. To do this, they call on the government to step in with public equity injections, taking ownership stakes that provide essential financing for firms at risk.

The report estimates an initial £45 billion of government funding would be needed – this would meet around 50 per cent of the cash flow crisis, with the other 50 per cent needing to be sourced from private borrowing.

Unlike a debt-based approach, public equity stakes can better absorb losses, reduce debt levels and give private investors certainty around the long-term viability of a firm, according to IPPR and Common Wealth.

The report says this approach would fill an important funding gap left by private financial markets. Despite the upfront cost, doing so would likely ultimately return net-benefits to taxpayers, with long-term returns on the investment. The researchers argue that the costs of losing so many big and small businesses across the country, and the hundreds of thousands of associated jobs, would far outweigh the price of supporting them now during this crisis.

The authors emphasise that such a move is not as radical as some may presume. Many mainstream macroeconomic organisations agree that equity stakes have an important role to play, such as the Bank of England and the IMF.

IPPR and Common Wealth propose utilising the existing “Project Birch” bail-out fund as well as creating new institutions to manage these public equity stakes. The think tanks also propose an SME Equity Fund to get emergency funding to small businesses and, ultimately, a Citizens’ Wealth Fund to manage the ownership stakes and ensure a return on investment.

The report calls on the government to give the new UK Infrastructure Bank, announced at the spending review, a broader mandate to provide finance and take equity not just in infrastructure projects, but across the economy to fuel a recovery.

The authors make clear that while the state would be taking ownership stakes in firms, it is vital that it remains at arms-length from business decision making to avoid political influence at the whims of ministers.

However, the report states that the initial investment should come with high level conditions. These should include commitments for investing in long-term growth, retaining jobs, staff training and upskilling, trade union representation, corporate governance, fair tax practices, and alignment with the net zero climate targets.

IPPR and Common Wealth recognise that not all firms can be saved, with some firms facing significant financial troubles even before the crisis. The government therefore needs a highly transparent approach for selecting firms to support with public equity stakes, which avoids singing out individual firms. Extremely indebted companies and ‘zombie firms’ should be avoided, with exceptions made for ‘strategic firms’ based on their regional and national employment significance, according to the report.

George Dibb, the new Head of the IPPR Centre for Economic Justice, said:

“Perhaps for some, the idea of the state owning shares in companies sparks concerns about nationalisation, but in fact across the EU and around the world this is the norm. The UK is actually an outlier among major economies for not already using public equity injections to support businesses.

“The Chancellor has already taken cautious steps in this direction; establishing a national infrastructure bank, forming the Future Fund of convertible loans, and a steel industry bailout with heavy conditions. But now is no time to be cautious – the figures in this report show there are potentially many more bankruptcies coming down the line putting jobs at risk. Now is the time for bold action which can help save viable companies from collapse in the short-term, and also complement an industrial strategy to set us on the right track for recovery in the long-term.”

“Even with the vaccine now rolling out, scores more companies face bankruptcy next year without the right support. Many businesses are already up to their eyeballs in debt, yet the government’s current support schemes seem to only consist of piling ever-more debt on them. This approach risks creating a generation of ‘zombie firms’: over-leveraged, with weak balance sheets, and struggling to invest in the skills and technologies we need.

“Instead, it is time we put ideology aside and followed the evidence. Many of the strongest economies across the world are now offering public equity stakes to normally healthy companies as a way to safeguard jobs and productive capacity. The Chancellor should follow suit, providing a common sense public equity injection to help temporarily distressed companies better absorb losses, reduce debt levels, while rebuilding a stronger, fairer, greener economy.”

The report authors are available for comment and broadcast interview

Our Common Wealth: A Citizens' Wealth Fund for the UK