In a comprehensive review of the future of UK payments, the think tank IPPR has set out how the transition to a ‘less cash’, but not cashless, digital economy can be managed to protect the vulnerable and spread digital opportunities widely and fairly.

The digital transition is already happening fast. While in 2008 60 per cent of UK consumer payments were made in cash, this had fallen to just 28 per cent in 2018. The IPPR report cites forecasts that by 2028 fewer than one in 10 payments will be made in cash.

The digital revolution in finance means a shift to a considerably less cash-based digital economy, but the prospect of a fully cashless UK is not on the horizon, argues IPPR. This shift is expected to boost UK productivity and create opportunities for business and consumers, but there is a significant risk that people and areas reliant on cash may be excluded.

Giant tech firms such as Facebook and Amazon are already starting to offer more personal financial services, alongside traditional banks, but the control they could have over huge amounts of people’s data poses significant risks.

The IPPR report argues that as cash use continues to fall and digital payments break new ground, it is critical that policymakers take action to shape the future of UK payments. To deliver a future that is both more digital and more just, IPPR recommends:

IPPR argues that these proposals, amongst others in the report, will deliver a path to a digital economy that delivers not just greater prosperity, but greater economic justice: where more people can access better payments and banking services, data is harnessed for the public good and the most vulnerable people are protected.

The report notes that an increasingly digital economy brings faster payments, more personalised services and greater convenience for digital users. However, if these benefits are only available to digitally savvy people – typically younger people and those with higher incomes - inequality could be embedded into the future of finance, it warns.

IPPR urges the government to seize this moment to prevent all the gains from digitisation flowing to big tech firms and big finance and instead deliver excellent financial services for all, a competitive innovative personal finance market and democratic control of data.

“The future will have less cash. But urgent action is needed to set the UK on course towards an economy that is both more digital and more just. By getting ahead now, we can invest the billions needed to get every part of the country ready for a more digital future and protect access to cash where people rely on it. This could see the potential benefits brought by a move away from cash invested to narrow rather than widen inequalities, handing control over from Big Tech and banks to people and communities.

“The move away from cash should only happen as fast as people are ready for, and the benefits of doing so should be shared. By setting new digital inclusion targets at the national, regional and local level, and investing to meet these targets, we can make sure bridge the digital divide and protect cash for those rely on it.”

“There are opportunities within reach as the UK economy shifts away from cash and towards digital payments – from productivity increases to preventing fraud and financial crime. But there’s also a danger that the shift to digital, if not proactively shaped, will work for some and leave many behind. The government should enable everyone to take part in the digital economy and ensure powerful companies like Apple and Google play their full part in shaping a fairer move away from cash in the UK.” 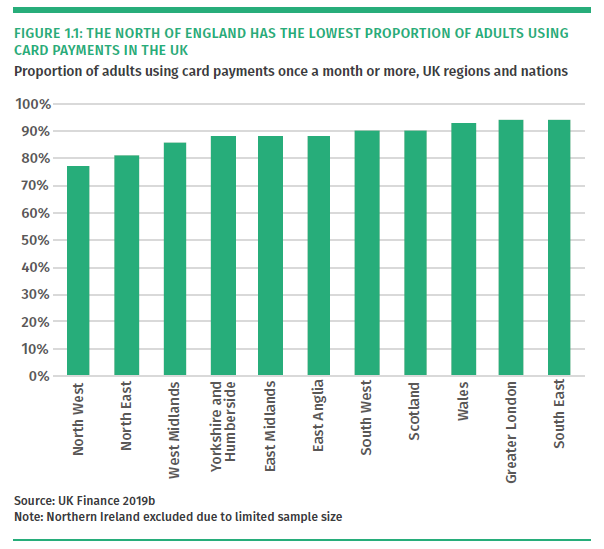