Budget investment boost of £33bn a year needed to put UK on path to net zero by 2050, Chancellor told

If the UK is to show true leadership on climate and nature as host of COP26, this must be the ‘first budget for climate and nature’, according to Ed Miliband and Caroline Lucas, two chairs of the cross-party IPPR Environmental Justice Commission.

Miliband and Lucas argue that the government must match its declaration of a climate emergency and legal commitment to a net zero target with the public investment needed – much of which would also deliver on government promises to ‘level up’ the nation.

Their intervention comes as new analysis conducted by the IPPR for its Environmental Justice Commission today reveals the scale of public investment that the Chancellor should be committing to if the UK is to hit its net zero target and take action to restore nature:

The analysis also highlights the need for a Just Transition Fund to ensure the decarbonisation of industry doesn’t unfairly damage affected communities and allows them to reap the benefits and opportunities that the transition will bring.

These commitments go significantly beyond what was promised in the Conservative manifesto for this fiscal year, which as the new analysis shows, weren’t even enough to deliver the government’s old target. And while investment (e.g. in carbon capture and storage) was promised to go up, it would still fall far short of the requirements needed to deliver net zero by 2050.

To hit net zero, the UK will need to be running on renewable energy; industry will need to be using mostly carbon-free processes; all homes and other buildings will have to be fully insulated; and public transport will need to be fast and abundant. In addition to making funding for these sectors available, the government will have to significantly increase its capacity to identify investable projects. For instance, it will be crucial to develop a framework for supporting industry’s switch to low-carbon technologies.

The government’s fiscal rule limits public investment to 3 per cent of GDP, but the IPPR analysis reveals that to hit the 2050 target, total public investment when combined with investment to deliver on other government objectives, would exceed the current fiscal rule. Taken together the level of investment would be closer to the long-term average of G7 countries of 3.5 per cent. But it would still be well below that of countries like Norway, Sweden and Japan which regularly invest between 4-5 per cent of GDP.

Graph 1 – Public Investment on the Climate Needs to Increase 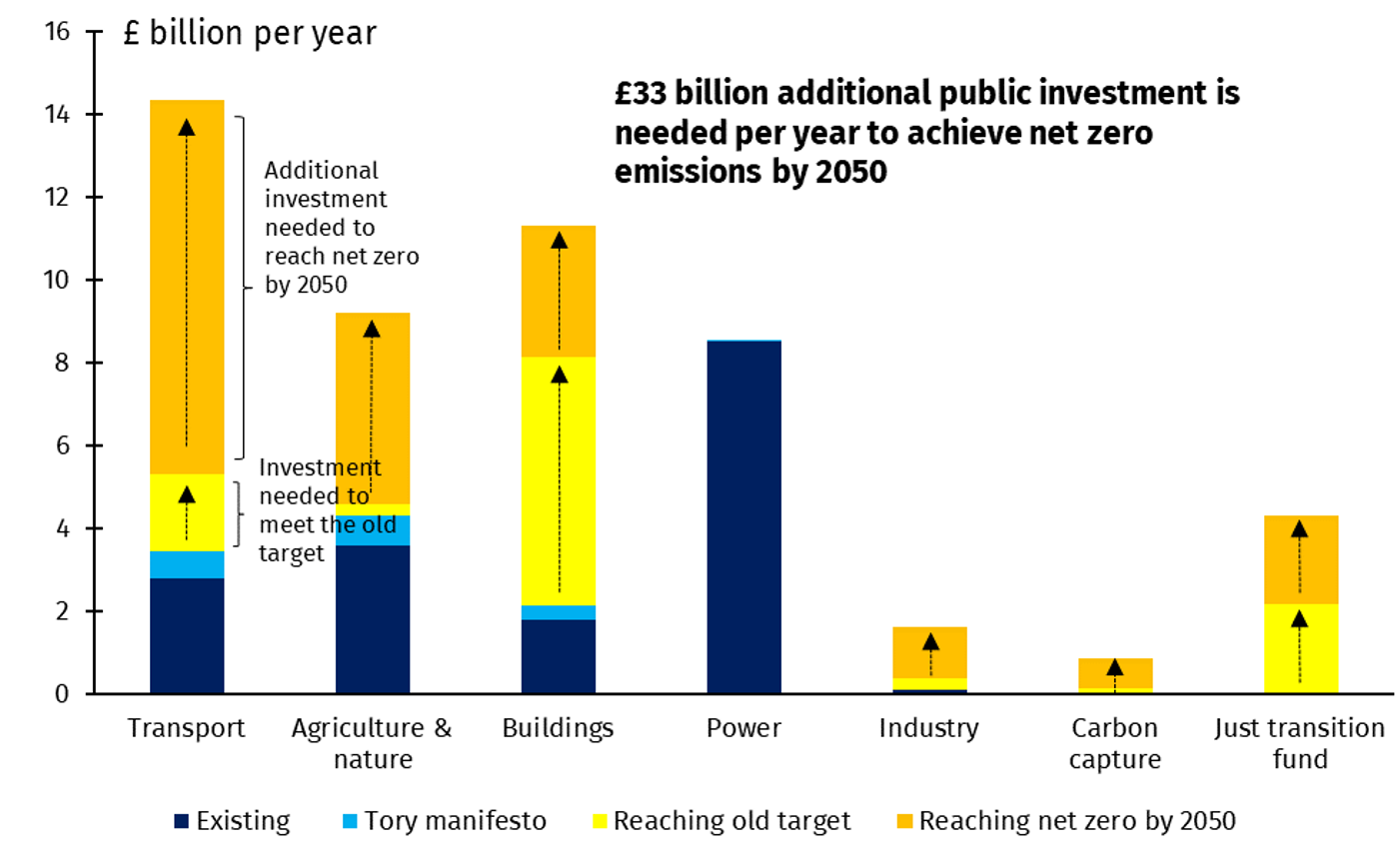 “This is the government’s opportunity, in the year of the COP, to show true global leadership on the climate crisis.

“We need a significantly tougher UK target for 2030 put in place this year to encourage other countries to follow and a budget that puts tackling the climate emergency at its heart.

“This will take investment but making these decisions will create hundreds of thousands of jobs, improve our natural environment, cut air pollution and make Britain a better place to live.

“It makes economic and environmental sense. The time to act is now.”

“This budget will be a litmus test of whether the government understands the climate crisis, and on the basis of the evidence, they are falling terrifyingly short of what is needed.

“With likely shocks to the economy because of the coronavirus outbreak, and the accelerating climate emergency, investing in a Green New Deal is now more important than ever.

“It wouldn’t only help us address the climate and nature emergencies, it would transform almost every aspect of our economy and society and deliver on government promises to ‘level up’ the nation by making our economy fairer and fit for the future.

“When the chancellor rises to his feet on Wednesday, he should announce investment on a scale that meets the multiple challenges we face”.

“The new chancellor has the opportunity this week to make his first budget the first real budget for the climate emergency.

“From warmer homes to better public transport, this investment can help the government meet its other objectives of levelling up and raising living standards.

“It’s important that the chancellor doesn’t let an arbitrary fiscal rule stand in the way of achieving this.”

It should also be noted that the estimates by CCC are average yearly costs between 2019 and 2050. As costs are assumed to decline over time, the CCC estimates likely constitute a lower bound in terms of what is needed as upfront spending in 2020.  For the new target we also use figures from the CCC. But we slightly adjust these in four cases.

This is a crisis: Facing up to the age of environmental breakdown