With social security payments now lagging far behind inflation, researchers at IPPR warn that the cost of living crisis will push many vulnerable benefit claimants into hardship and destitution, without a serious boost to benefit payments and an end to inappropriate conditions and excessively punitive sanctions that limit payments.

After a pandemic induced drop-off, new IPPR analysis of the latest DWP figures show that sanctions on benefit claimants are almost back to pre-pandemic levels (chart in notes), despite the cost of living crisis now increasing the risk of people falling into destitution. In November 2021, when the latest data is available, 46,000 claimants were sanctioned, but the number of people being sanctioned has likely risen since then.

In a new report, IPPR warns that people on Universal Credit are not being treated as individuals, with their own circumstances and needs - leading to impossible conditions being imposed on claimants to receive their benefits. These inappropriate conditions set claimants up to fail and lead to sanctions, according to researchers.

The think tank warns that this means many people mistakenly find themselves ‘at the sharp end of an often-punitive system’ and that for those vulnerable people with complex needs, this can be potentially lethal.

IPPR says that ‘punitive sanctions’ remain a core part of the Job Centre regime, despite limited evidence on their effectiveness and extensive evidence of the hardship they can cause - particularly for those with complex needs.

Interviews with those adversely affected revealed that many claimants felt pressured by the power-dynamic to agree to unsuitable conditions without raising concerns, and that open-plan Job Centres made them reluctant to raise important personal information. Others reported being put ‘on edge’ by the presence of security guards.

“I feel like I was in that situation where I haven’t got a penny to my name, I would have agreed to anything. If I challenge it they are gonna question it and it could delay everything.”

IPPR argues that the entire Universal Credit system needs to be reformed to increase levels of support and to achieve a higher basic minimum standard of living. In response to the Chancellor’s ‘shockingly inadequate’ Spring Statement, IPPR called for a policy combining an increase in Universal Credit and legacy benefits of 8.1 per cent and a rise in child benefit by £10 per child per week.

To ensure the benefits system works better overall and to ensure claimants, particularly those with complex needs, do not face inappropriate conditions or punitive sanctions, IPPR’s report calls for:

“As the cost of living crisis deepens, the UK government must do more to support people living on low incomes – whatever their circumstances. It absolutely shouldn’t be making people’s lives any harder by imposing inappropriate conditions and punitive sanctions on them in a time of need.

“Alongside desperately needed action to increase the value of Universal Credit to keep up with the rising cost of living, we also need urgent action to ensure our social security system offers genuine security where people fall back on it. This should include urgent reform of the punitive sanctions regime, and a wholesale review of how the system can treat every claimant with dignity and respect.”

“Too often universal credit treats you like you must be lying and like what you have said isn’t true. The staff have no idea what it’s like to be on the street or moving from one friend's sofa to the next. People who hit rock bottom need time and support to get themselves sorted out, but instead of support, DWP staff often feel like they are judging you, that you have failed and need to be taught a lesson.”

“Our specialist teams working in hospitals with homeless patients hear too many stories of sanctions, exclusions or inappropriate barriers being enforced by the benefits system. It often seems that the system withdraws support from people precisely when they need it most, when someone’s circumstances suddenly fall apart, when a relationship has broken down or when bad luck strikes.

"The benefits system defaults to assume wrong-doing and deceit. For people who’ve been made homeless, perhaps in the context of a mental illness or battling an addiction, Universal Credit is too often another source of stress and difficulty, rather than a basic building block of their recovery.” 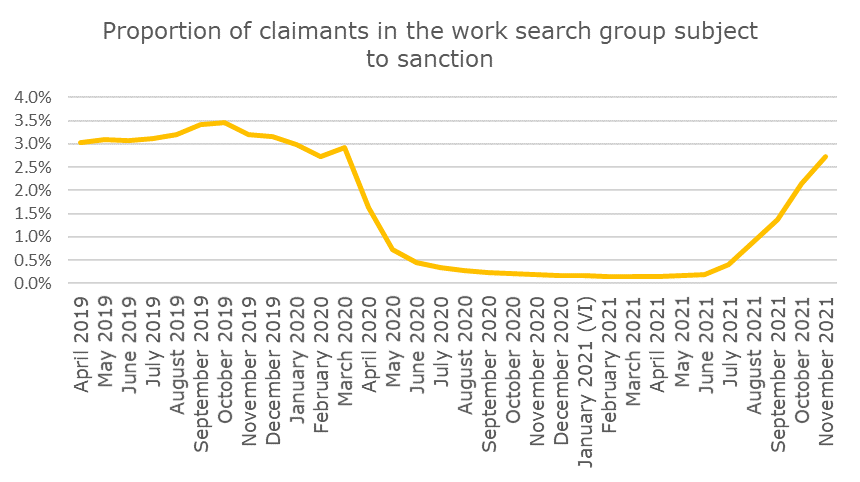