New IPPR analysis shows that if the UK extended non-EU visa system to EU nationals, just 7% of EU-born construction employees would have been eligible to work in the UK

The construction industry would be severely impacted by ending freedom of movement after Brexit a new report published today by IPPR, the progressive policy think tank. The report shows that industry has become increasingly reliant on EU migrants in order to meet skills and labour shortages.

New IPPR modelling to forecast the potential impact of Brexit shows that construction is exceptionally vulnerable to changes in migration policy. If the migration system for non-EU migrants was replicated, just 7% of current EU-born employees in construction would have been eligible to come here for work. Even in the least-restrictive scenario modelled by IPPR two in three current EU-born employees working in the UK would have been ineligible.

The report shows that growing skills shortages are already constraining the UK’s ability to build. Construction has the joint highest level of skills shortage vacancies of any industry, and two thirds of chartered surveyors say labour shortages are limiting building activity. Despite the skills gaps, employers in construction have failed to train enough workers; the proportion of employers in construction providing training is second lowest of any industry. The construction skills system is dysfunctional, and recent reforms to the apprenticeship system may lead to a decline in construction apprenticeships at a time when we need to see a huge increase.

The report further shows that:

“Brexit threatens to turn the growing skills challenge in the construction industry into an existential crisis, with significant negative consequences for our economy and for the housing crisis.

“The Government wants to double house building, and cut net migration by more than half. To do either would be difficult. But to do both together – when our construction industry has become increasingly reliant on EU-born workers – is simply not possible.”

“If we are to build the homes, the commercial property and in the infrastructure that our country needs after Brexit, then government needs to wake up, recognise the scale of the threat, and work with the industry to limit the impact.”

“I welcome the findings of this excellent report which highlights just how severe the impact of a hard Brexit will be on the construction industry.

“More than 100,000 of the capital’s construction workforce are from the European Union and although we are working hard to train up more Londoners, it is impossible to escape the fact that ending freedom of movement would have a crippling effect on our plans to build the homes Londoners so desperately need.

“This is exactly why the Mayor and I continue to argue that qualified freedom of movement of people is the best way to protect economic prosperity in London and the UK in the aftermath of Brexit – and that the Government must provide a cast-iron guarantee that EU nationals in the UK can stay here long term. In addition, just last week, the Mayor published for consultation our Skills and Adult Education Strategy that aims to ensure every Londoner has access to the training they need.”

The new IPPR report Building Britain's Future? The construction workforce after brexit will be available at https://www.ippr.org/research/publications/building-britains-future-construction-workforce-after-brexit from 00.01 Thursday 30th November. Advanced embargoed copies are available from the press office.

IPPR’s modelling examines how many of the current EU nationals working in construction would have been able to come to the UK under different scenarios – as seen in the graph below. 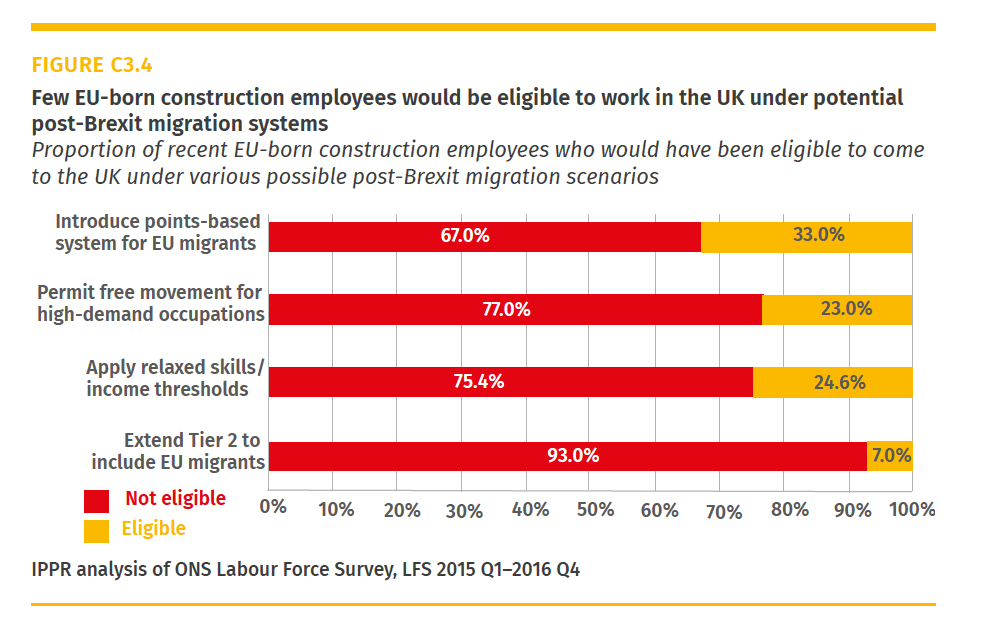 IPPR aims to influence policy in the present and reinvent progressive politics in the future, and is dedicated to the better country that Britain can be through progressive policy and politics. With nearly 60 staff across four offices throughout the UK, IPPR is Britain’s only national think tank with a truly national presence. Our independent research covers the economy, work, skills, transport, democracy, the environment, education, energy, migration and healthcare among many other areas.