Some taxes can be raised this year without stifling the recovery, especially if the Chancellor commits to a major stimulus package alongside them, according to IPPR. In a new report, the think tank identifies four priority tax reforms: capital gains tax, corporation tax, wealth tax and a land value tax - that could make the system more balanced. These would also collectively raise up to £55 billion for the Treasury.

Researchers from the IPPR Centre for Economic Justice argue that raising certain taxes now could ensure the recovery is more balanced, more sustainable, and could prevent inequality from escalating further.

They estimate that these reforms would have minimal impact on the speed of the recovery, if they were accompanied by a major stimulus package. Moreover, they would lay the groundwork for a fairer and more prosperous post-recovery economy. Last week IPPR urged the Chancellor to ‘boost it like Biden’ and calculated that a UK recovery stimulus of around £190 billion was needed to fully restore jobs, investment and public services.

The researchers argue that while more wide-ranging reform of the UK’s lopsided and unfair tax system is needed eventually, those tax reforms that have a limited short-term impact on growth should be prioritised this year, starting in next week’s budget.

The IPPR report sets out four criteria that tax reforms must meet this year must meet. They must protect the incomes of those already hardest hit by the crisis; make the tax system more efficient by reducing unfair advantages, biases and loopholes; have low impact on investment and spending needed to boost the recovery; and future proof the economy, such as by encouraging the growth of green sectors.

Following these guiding rules, the report urges the chancellor to begin to address some of the most glaring problems of the UK tax system and raise more funds by:

The researchers argue that any short-term impact caused by these reforms would be dwarfed by the overall beneficial growth that a major stimulus could bring.

“We must move away from the binary debate on tax rises and the recovery. The fact is, some taxes, like corporation tax and capital taxes, can be raised now without slowing the recovery, as long as they are accompanied by a big stimulus.

“For a balanced recovery, we cannot afford to leave the fault lines of our broken tax system untouched. The very low taxes on the wealthiest and corporations widen inequality, are bad for the economy and put public finances on a shaky foundation. With many businesses and wealth owners having benefitted from unprecedented government support measures throughout the pandemic, it is only fair for those who can afford it to contribute their fair share for a sustainable recovery.

“After the pandemic, further tax increases may be needed to put the public finances on a sustainable footing in the medium term. The exact size of this will partly depend on how quickly the economy bounces back – which is why we need a major stimulus, similar in ambition to that proposed by US President Biden – to drive rapid recovery.”

“The economic effects of this pandemic have been hugely uneven – some businesses and households have racked up huge debts, while others have seen large gains. In order to ensure that the costs of the pandemic are fairly shared and that the recovery isn’t held back by debt, those who have gained must pay their fair share, and that those who have lost out should receive the support they need.”

Shreya Nanda and Carsten Jung are available for interview 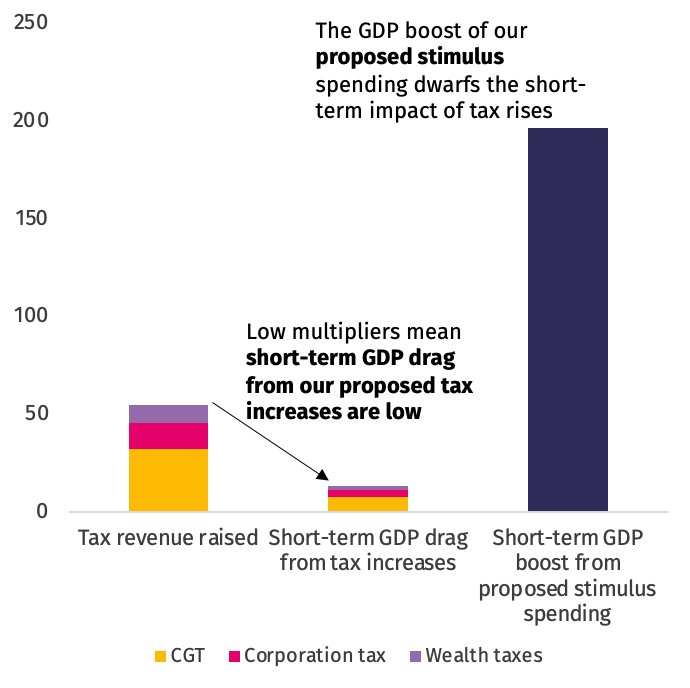 More than half a million UK employers at risk of collapse in spring as cash reserves fall perilously low, finds IPPR

Just tax: Reforming the taxation of income from wealth and work