The combined effect of the budget will be to leave 750,000 otherwise viable jobs unnecessarily at risk by this time next year, according to new IPPR analysis.

The chancellor’s failure to stimulate the economy sufficiently means it will not return to full capacity as quickly as it could, and leaves it significantly weakened for years to come. A stronger stimulus would have prevented this, by delivering higher public investment, strengthening public services and providing targeted transfers for families hardest hit by the pandemic.

Combined with his decision to have no follow-up work support scheme following the end of furlough in September, this could mean unemployment rising to 2.7 million (8.5 per cent) a year from now.

That compares to 6.1 per cent if the chancellor had pursued a bolder stimulus, comparable in ambition to that planned by the new US administration, according to IPPR projections. The difference is equivalent to 750,000 jobs. Unemployment now stands at 1.7 million (5.1 per cent).

In his budget Rishi Sunak should have “boosted it like Biden” to secure a strong and sustainable recovery, according to IPPR. The chancellor’s total planned stimulus after the budget is only half of the £190 billion IPPR estimates is needed for the economy to bounce back quickly, in a fair and sustainable way.

Public investment after the budget will remain below 3 per cent of GDP, while it could have been raised to 5 per cent - which would have created jobs and helped reach the UK's climate targets.

In its new analysis of the budget, IPPR demonstrates that the Chancellor’s total spending plans for 2021/22 amount to only 4.4 per cent of GDP, whereas the Biden administration’s stimulus plans are closer to 9 per cent of GDP.

Earlier this month, IPPR estimated that a stimulus of £190 billion (8.6 per cent) was needed for a strong recovery that secures jobs, investment and public services. 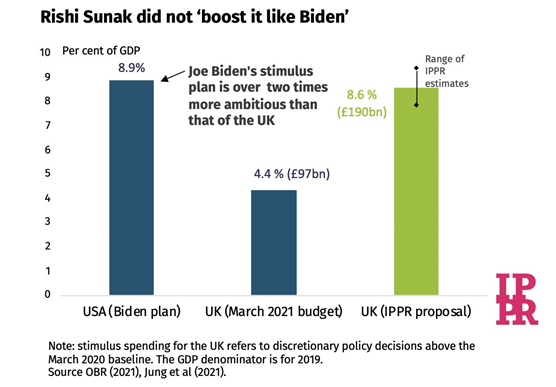 “The chancellor had an opportunity to boost it like Biden, using bold public investment to drive a bounce-back from the Covid-19 crisis. What he actually set out is not enough to restore the UK economy to pre-pandemic levels and puts 750,000 jobs unnecessarily at risk.

“We welcome Rishi Sunak’s announcements of extensions to business support, but we don’t just want businesses to survive, we want them to thrive if we are to grow our way out of this crisis.”

“There are serious risks around the chancellor’s support package. With only half the ambition of Joe Biden, Sunak has bet on a recovery largely driven by higher income households spending their accumulated savings. But two in five households are worse off than before, and the same share of small businesses is at risk. We will not see a burgeoning bounce back without a further fiscal boost.

“The chancellor also did too little to invest in future growth. The Treasury contends there will be significant long-term damage to the economy, but the budget does not address this. Higher public investment could have driven a clean recovery and boosted the care economy, creating future-proof jobs. Rishi Sunak needs to step up and act bigger and bolder to achieve both a strong recovery and sound public finances.”