Revealed: Trust in politicians at lowest level on record

A major new IPPR think tank report warns that a decline in political trust is undermining liberal democracy in the UK. In 1944, just one in three British people (35 per cent) saw politicians as merely ‘out for themselves’, while by 2014 that number was 48 per cent and in new IPPR polling conducted last weekend, 63 per cent said they share this view.

The IPPR poll, carried out by YouGov with a representative sample of more than 1,600 voters, replicated the historic Gallup poll first run in 1944 that asked people across Britain whether they think politicians were out for themselves, their party, or their country. When IPPR asked the question in May this year, just after the Greensill scandal, a clear majority (57 per cent) said they thought politicians were ‘out for themselves’, suggesting that distrust in politics had already become the norm.

The sharp rise since then suggests that the ‘sleaze scandal’ that has recently consumed Westminster has taken an even greater toll on public confidence in politics and politicians, the researchers say.

IPPR argues that while sources show levels of political trust in Britain rose following the onset of the Covid-19 pandemic, this opportunity to rebuild trust may already have been squandered. Now further action is needed to rebuild trust in politicians and the key institutions vital for a thriving and effective democracy.

Analysis of the British Election Study data revealed that levels of trust are defined by a number of factors, and how Brexit and the 2019 election changed things:

IPPR warns that declining political trust is associated with rises in disengagement from the political system, populism and polarisation of society. The think tank points to the US as a warning of what could happen in the UK, with levels of trust strictly split down party lines depending on which party is in power, and populism and polarisation blighting everyday politics.

The progressive think tank also argues that a lack of political trust makes it harder for leaders to achieve consensus to take bold action using state power to solve problems. Solving long-term problems such as regional inequality or the climate crisis, where policy may not deliver immediate benefits, requires trust that action will eventually result in a better future for everyone, according to IPPR.

progressives. Declining trust is thought to be linked to a decline in support for

immigration. Without trust in government, it will be harder for progressives to advocate and enact policy requiring greater levels of government intervention, according to the report.

The report concludes that lack of trust is driven by the perceived performance of government and peoples experience with democracy and government. A decade of stagnant growth since the financial crisis, rising inequality and struggling public services, combined with an unrepresentative voting system, overly centralised government and a slew of stories of ‘sleaze’ scandals have contributed to a downward spiralling of trust, according to IPPR.

To reverse this trend, the report sets out four significant social and political gaps that must be closed to improve political trust in the UK:

“Our research shows a significant and disturbing decline in public trust in politicians and democracy in the UK. More people than ever are convinced that MPs are primarily looking out for themselves, rather than their country. Rather than taking bold action now to reverse this long-term trend, the government seem to be making things worse.

“These trends are deeply concerning. In a political system where voters allow and rely on others to make decisions on their behalf, trust is the most valuable commodity. Without it, our democratic systems stop functioning effectively. Our politicians must act now to set the UK on a new course, away from democratic dissatisfaction, towards a system which delivers on the priorities of citizens and where everyone has a say in how society is governed.”

Will Jennings, professor of political science and public policy at the University of Southampton, and principal investigator at TrustGov research project, said:

“Politics has always been seen as a dirty business by voters, but there is little doubt that trust in our political class has reached new lows in recent years. Citizens increasingly see British politicians as self-serving rather than wanting to do the best for their country. We see the lowest levels of trust the further away people live from Westminster.

“While trust in our politicians and satisfaction with democracy is in decline, Brexit has disrupted this long-term trend. Leavers are now more trusting of MPs and more satisfied with UK democracy than Remainers. However, taking back control has sadly not delivered a more trusting citizenry overall, but rather has boosted trust among the political ‘winners’ of recent years – while the losers are more disillusioned with our political class than ever before.

“If we are to restore trust in British politics, as part of a wider project of national renewal, we need an honest conversation about the depth of the distrust and disillusionment of citizens.” 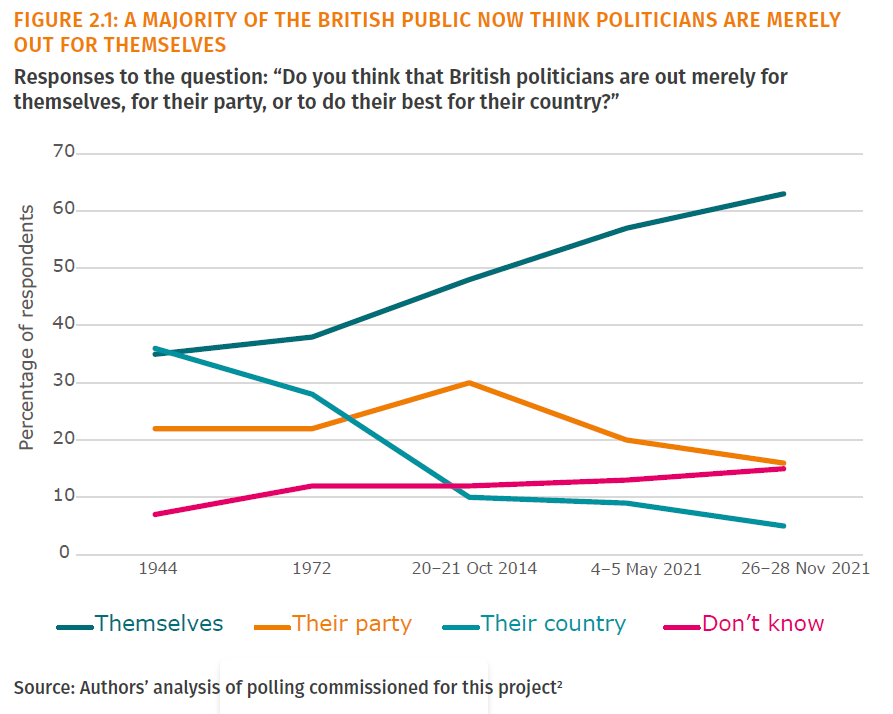 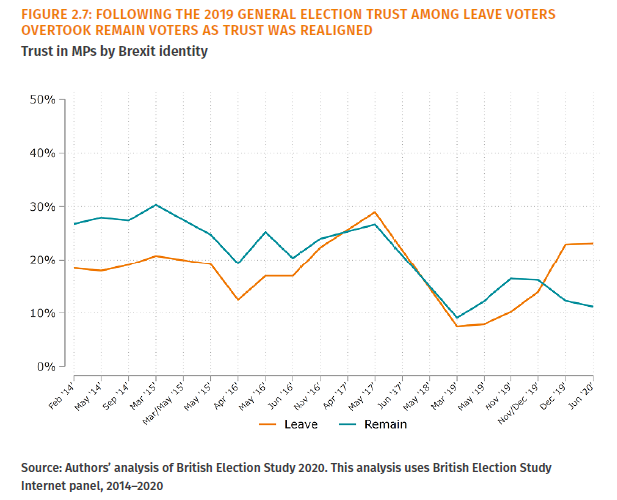