Tax cuts debate: half the benefit of a 1p income tax cut would go to richest households, IPPR analysis finds

Cutting base rate from 20 to 19 per cent would cost the Exchequer more than £5bn, but little of that would reach those on lowest incomes

As Conservative leadership candidates debate a range of potential tax cuts, new IPPR analysis of the effect of lowering the basic income tax rate to 19 per cent has revealed a wide gap between its impact on the richest and poorest households.

Almost half the total tax reduction would go to the fifth of households with the highest incomes, with just 2.6 per cent finding its way into the budgets of the poorest.

With a total cost to the Treasury of just over £5 billion, that means around £2.5 billion would be handed back to those on the highest incomes – compared to £137 million to the lowest. 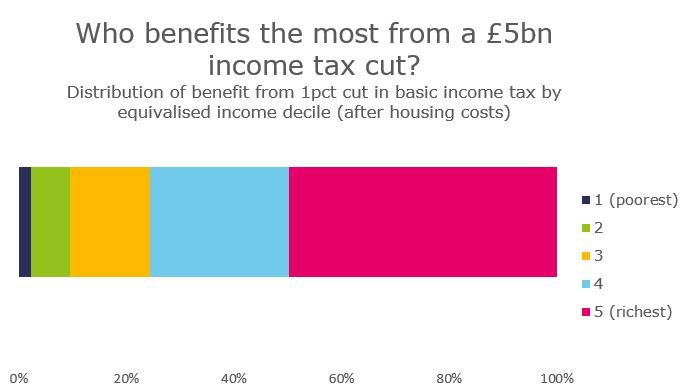 Source: FRS 2019/20. Income calculations are equivalised and after housing costs.

IPPR researchers say this makes basic rate income tax cuts an ineffective tool to help households struggling most with the cost of living crisis, and argue that the £5bn would be better used in other ways.

“Tax cuts are an incredibly inefficient way of getting money to those who need it most. To support those on low incomes through the cost of living crisis, it would be much more effective to provide a higher level of targeted support towards those on the lowest incomes.”

“There would surely be much better ways to use the £5 billion such a tax cut would cost – such as investing in health and social care, retrofitting homes for energy efficiency or strengthening the social safety net for the poorest in our society.

“Even if fully funded, such money could be better prioritised than for a tax cut that would primarily benefit high earners.”

George Dibb is available for interview

IPPR is the UK’s pre-eminent progressive think tank. With more than 40 staff in offices London, Manchester, Newcastle and Edinburgh, IPPR is Britain’s only national think tank with a truly national presence. www.ippr.org