New analysis shows that two major airlines have paid out dividends in excess of £2.6 billion since 2014, while the sector is underpaying corporation tax

Following reports that the UK government is drawing up plans to buy equity stakes in airlines hit by the pandemic, two think tanks, IPPR and Common Wealth, are calling for any bailout to include strong conditions for workers and the public.

The think tanks argue that any bailout of the aviation sector must be contingent on ensuring job security, action on climate change, and a public ownership stake. The think tanks are calling for:

The call comes in the wake of EasyJet intending to go ahead with its £174 million dividend payout, including £60 million to its founder, despite the company calling for a state bailout.

New analysis from Common Wealth shows how airline companies and airports have prioritised the interests of shareholders over the long-term success of the company or the interests of their workforce, the environment, and wider society. The findings include:

“Extraordinary and difficult times are already producing extraordinary measures. With the Chancellor now considering injecting cash into the airline industry in return for shares, it is vital that public support for the sector comes with conditions attached that work for all of us.

“The crisis demands immediate action to ensure economic security for all. But in doing so, we can take collective steps to build a fairer future economy, one that is just and sustainable by design.”

“The Prime Minister has said that this time must be different from when the banks were bailed out in 2008. If that’s to be the case, then public money must be used in the public interest.

“Following this period of unprecedented economic intervention we must not just slip back into business as usual. It is vital that decisions taken today support good jobs and a more sustainable economy, rather than executives on big pay packages.

“If the government is going to bail out the airlines, that must mean taking a long-term equity stake and conditions to keep workers employed, a crackdown on runaway executive pay and dividend payouts, and an overwhelming focus on decarbonisation. It must also mean firms must pay their fair share of tax.” 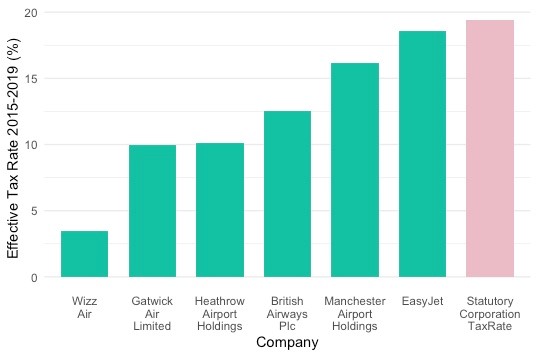 Notes: Average effective tax rate is defined here as taxes paid/pretax income, expressed as a percentage, over the period 2015-2019. Note that due to data availability, data for Heathrow Airport Holdings and British Airways Plc reflects the years 2014-2018. As a point of comparison, we have included the average statutory UK Corporation Tax Rate over the same period, as designated by HMRC. British Airways PLC is the UK headquartered subsidiary of International Airways Group.