New analysis reveals systematic correlation between wealth, poverty, social conditions and health. The IPPR think tank report also demonstrates that education, skills, welfare and public health services all have a strong link to health outcomes and life expectancy, and notes that all of these services have faced cuts over the last decade.

The report identifies clusters of areas of England where multiple disadvantages are conspiring to drive down health outcomes and prevent life expectancy from growing.

Northern cities and suburbs, midlands cities and coastal cities were identified as areas where public health was being particularly influenced by a combination of material conditions and lack of health infrastructure, according to the research.

The analysis shows that if health outcomes across the country matched those seen in parts of the country where health is traditionally best (the home counties and more affluent London boroughs) we would see:

In a rebuke to the prime minister’s conference speech suggesting that the health disparity between Ribble Valley and Blackpool was due to ‘some royal jelly’, the think tank shows the reality is that variation comes down to differences in relative wealth, poverty, education and skills levels.

The analysis conducted by IPPR and LCP – a leading analytics consultancy – shows that just before the pandemic hit:

Data for every area of England can be viewed in this first-of its-kind health inequalities tracker produced by LCP – link here.

IPPR suggests that the government’s over-reliance on GDP - a poor predictor of health - often means it fails to invest in the things that would best support our health. The think tank suggests the Treasury introduces a dashboard of measures to supplement GDP – including the ONS’ health index. This, it says, would better cost in the value of health, after a pandemic that proved healthy lives are vital to a healthy economy.

IPPR also argues that the chancellor should announce and deliver a new ‘public health budget’ each year. This would ringfence up to £35 billion from the existing public finances for the explicit goal of maximising public health and reducing disparities through investment in social infrastructure. IPPR’s analysis suggests priorities for an inaugural public health budget, including:

IPPR points to New Zealand’s Wellbeing budget as an example of a country successfully moving away from GDP as a sole measure of prosperity, to good effect.

“While the prime minister and his health secretary have recognised that stark health disparities exist in this country, they are currently failing to address the underlying causes. It’s not a ‘royal jelly’ that explains the difference between Blackpool and Ribble Valley – it’s poverty and multiple disadvantage.

“Our analysis shows the material conditions of the places we live – and our exposure to poverty, wealth inequality, unemployment, poor education, worse early years development or lower access to local public health services – combine to undermine the health of many people in our country. This has a social cost, and an economic cost, and runs counter to the government’s ‘levelling-up’ rhetoric.

“At the spending review, the Chancellor should announce a public health budget that invests in the long-term health of the nation, not just short-term GDP gains. The government needs to learn the lessons of New Zealand’s ‘Wellbeing Budget’ and prioritise public spending in areas that boost the health and long-term prosperity of the nation. Creating good jobs, improving education, expanding skills and enhancing public health services will have a major impact on levelling up health across the country.”

“This research demonstrates the clear link between good health and a range of other socio-economic factors. It also highlights that significant inequalities exist and are deepening further. Investment and resources are required but must be targeted and be proportionate to need. There is a critical role for data and localised information in identifying the areas of most need and ensuring those communities are able to access the funds required to rebalance, rebuild and realise the opportunities that good health brings.”

"Our many members, who directly support people living with ill health, impairment and disability, know that the burden of illness falls very unequally on the different communities they serve. This disease of disparity has made it harder for us to manage the pandemic, and it will make it even harder to recover from it. Investing in health and wellbeing, and everything that is needed to help people to live as well as possible for as long as possible, needs to be at the heart of the government’s levelling up agenda. If we don’t narrow the gap, people’s lives will continue to be blighted by preventable pain, anxiety and loss of independence, and our health and care system will continue to fail those who most need it."

Chris Thomas, the report’s lead author, is available for interview 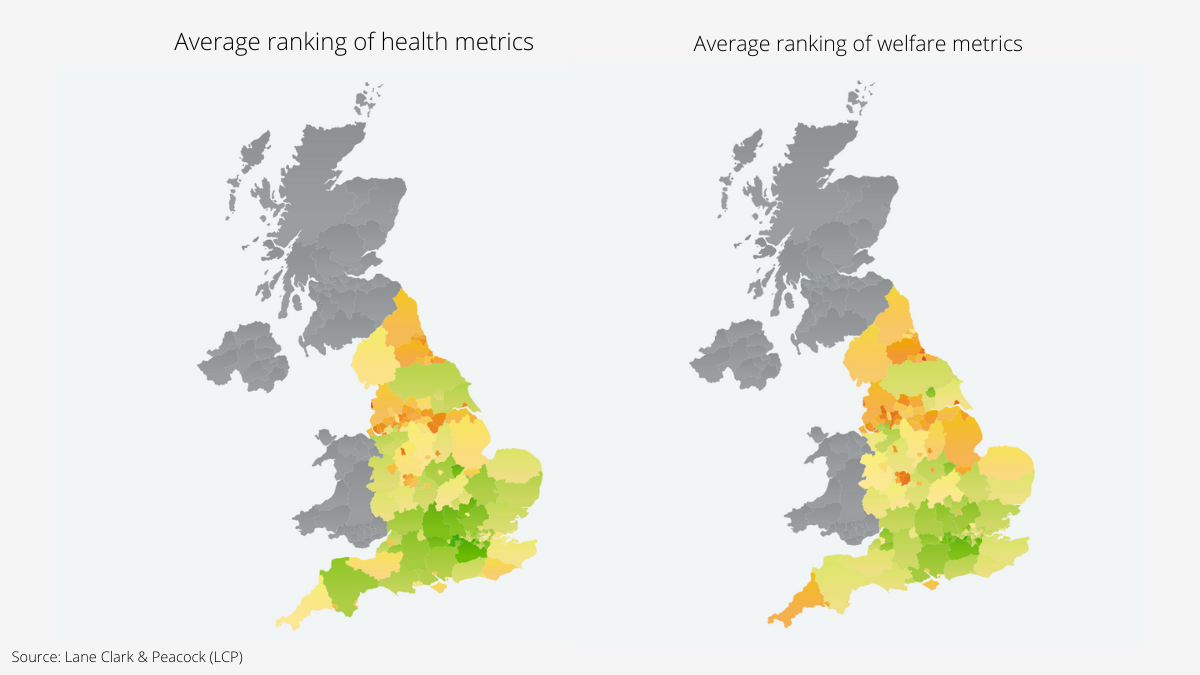 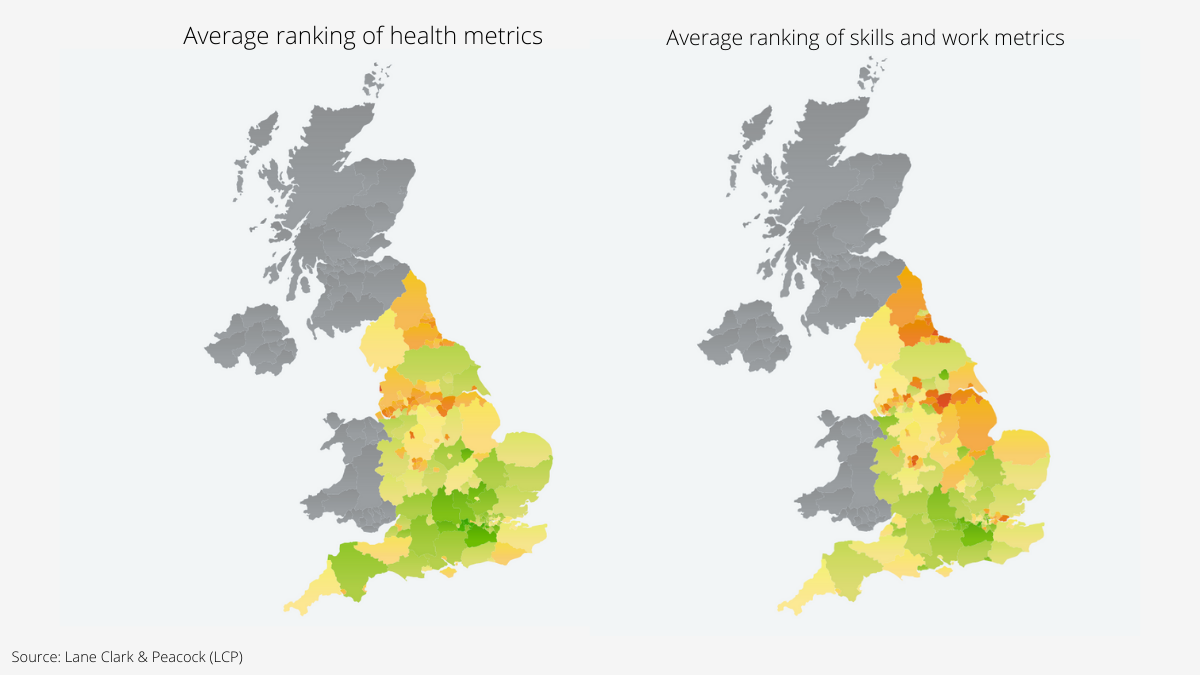 Detailed data for each area is also available and further shows the stark correlation between health and wealth. Explore it here: https://healthandwealth.lcp.uk.com/ 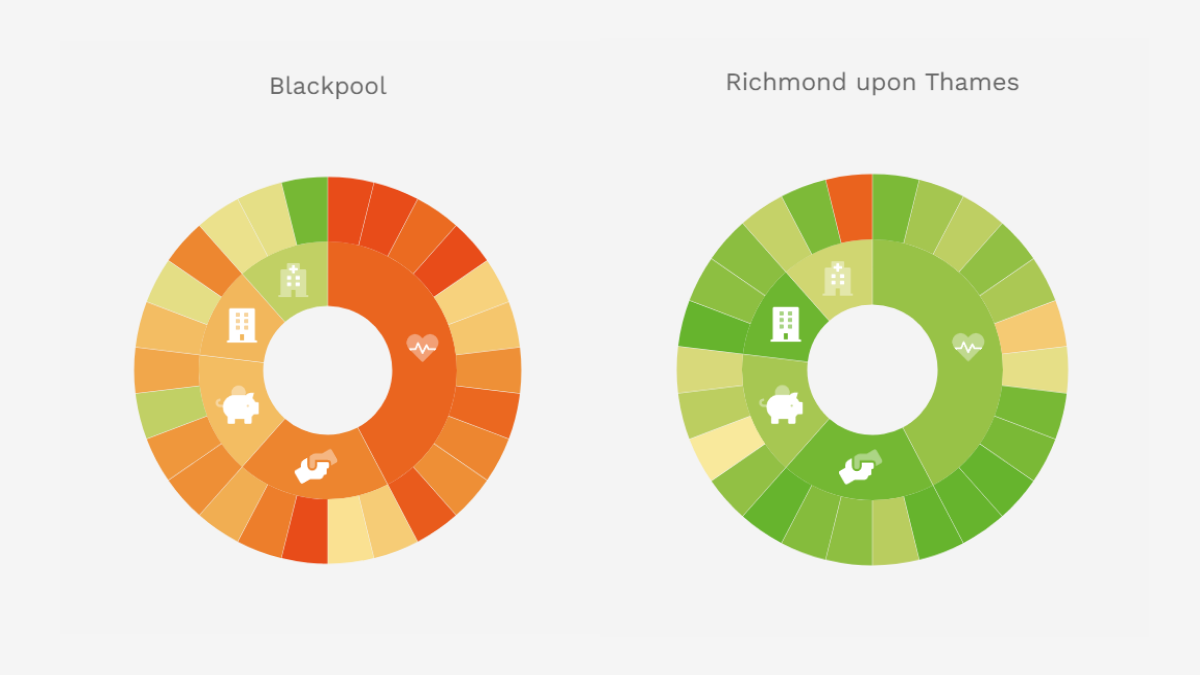