Democracy in Britain: Essays in honour of James Cornford

To celebrate the life of James Cornford and his contribution to constitutional reform, IPPR, with support from the Nuffield Foundation, is publishing a collection of essays in his honour. Together, they set out a democratic reform agenda for Britain in the 21st century.

James was responsible for some of the most pioneering and influential work on constitutional and democratic reform in the UK in recent times. As founding director of IPPR, he was the driving force behind The Constitution of the United Kingdom (1991) which provided the blueprint for much of the constitutional change enacted by the New Labour governments. 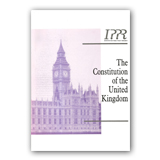 To mark the publication of Democracy in Britain, IPPR has made available once again The Constitution of the United Kingdom, a landmark document in British constitutional debates and an inspiration and starting point for many of the arguments and ideas put forward in this volume.

Give Holyrood some welfare powers

Anti-establishment politics of all shades are on the rise

The Constitution of the United Kingdom

The parties must stop dithering and address the English question

Will 2014 be the year of the populist party?