Automatic enrolment for the people? The case for radical action to reverse the decline of trade union membership

Union membership is particularly low among workers who could most benefit from membership, and from the protection that brings. Younger workers, workers with low or no qualifications, workers in low pay, and workers in occupations and industries who are more likely to be disrupted by automation are all less likely to be union members than the average.

The decline in membership is rightly a cause for concern among the union movement. But the decline in union membership should also be a cause for concern for government. A recent review of existing literature showed that the presence of trade unions in a workplace is associated with a number of significant benefits; from higher and more equal pay to better work/life balance and family friendly. Weaker labour power has had a negative impact on our wider economy too. As the graph below shows, the decline in union membership has been associated with a rise in inequality, as working people are less able to secure a fair share of the wealth that we collectively generate. It’s not just trade unionists and left-wing economists saying this. Andy Haldane, the Chief Economist at the Bank of England has shown how the decline in union membership and the weakness of labour helps explain sluggish pay growth despite record low unemployment. And the IMF have shown how declining union membership has fed the surge in incomes at the top and the massive increase in inequality we have seen across advanced economies. 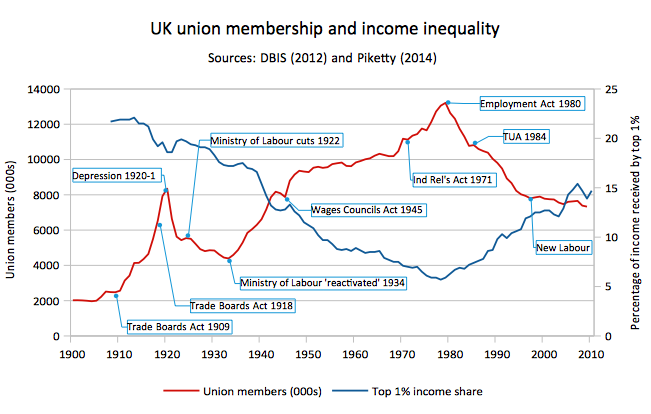 If we are to reverse the decline, first we must understand it. There are a number of factors which are often cited here. First, economic change has led to an environment which is more challenging for unions to organise. We’ve seen a relative decline in employment in the public sector and in private sector industries which have traditionally been heavily unionised, and a growth in industries which have a very limited union presence. Second, some have pointed to changing social attitudes, and a move away from collectivist approaches. However, we shouldn’t overstate the impact of changing attitudes. Over the last forty years, while union membership has declined, public attitudes towards unions have actually become more positive. Four out of five workers say that unions are vital to protecting workers’ interests, with young workers – who are less likely to be union members – being most positive about unions. Third, we cannot ignore the impact of Government policy. Under the Thatcher and Major Governments, we saw a deliberate, sustained and ideologically driven assault on the trade union movement.

Trade unions need to adapt to rapid changes in the world of work, and many are. There is some fantastic innovation happening in the union movement, most notably the work that the TUC are doing on recruiting young workers. But the scale of the challenge is great. Union membership has fallen so far in the private sector, and it is lowest amongst those who arguably need protection the most. Union innovation alone may not be enough. So, given the evidence of the benefits of trade unions for our economy, given we know that workers are increasingly supportive of trade unions but membership continues to fall, and given government policy has been part of the problem, then government policy must be part of the solution.

It is time that we look again at our industrial relations system, and think about how we can level the playing field, so that trade unions are better able to recruit, to organise, and to improve the experience of work for working people. That’s exactly what we’re doing as part of the IPPR Commission on Economic Justice.

There are some obvious measures that a future Government could take, such as repealing the last Government’s egregious and illiberal Trade Union Act, and allowing trade unions to use e-balloting, as the Conservative Party does itself.

But we need to consider more radical options. One of these could be automatic enrolment into trade unions.

This would learn from and build on the fantastic success of automatic enrolment in workplace pensions. The Pensions Act of 2008 obliged employers to automatically enrol their employees into a workplace pension scheme unless they decided to opt out. Auto-enrolment was rolled out from 2012, starting with large employers, and it was extended to all employers in February this year. Auto-enrolment has had a transformative impact on pension savings. Analysis by IFS in 2016 found that the employee participation rate in workplace pensions at affected employers had increased by a massive 37 percentage points, from just over half of workers to nearly nine in ten. What’s more, the impact was largest among groups who had previously had lower savings rate; the participation rate for employees in their twenties at affected employers tripled.

So, could a future Government introduce auto-enrolment into trade union membership for some areas of the economy? This could operate in a similar way to auto-enrolment into workplace pensions. On starting employment, in the absence of decision to opt-out, a worker would be automatically enrolled into a trade union, with their union subs deducted from payroll, just as their pension contributions are. This is of course different from the ‘closed shop’, as workers would have the right to opt out. But it would switch the default to union membership. Just as auto-enrolment has helped reverse the decline in pension saving, the strong latent support for trade unions would suggest that auto-enrolment could reverse the historic decline in union membership, and strengthen labour power and employee voice in our economy.

I talked about the idea on the latest edition of Reasons to be Cheerful. You can have a listen here. This is just one of the ideas we are looking at as part of the Commission on Economic Justice. It would need to be piloted, and it may not be the right thing for all areas of our economy, but it could help redress the imbalance of power in some sectors, particularly for platform workers in the gig economy.

If you’re interested in the subject, IPPR have got a call for evidence out now. It would be great to hear your views.

Joe Dromey is a Senior Research Fellow at IPPR, he tweets @Joe_Dromey.