Failing to plan (for growth) is planning to fail

In March of 2021 the government chose to scrap its pioneering Industrial Strategy just as it was most needed to help the recovery from the Covid-19 pandemic. In place of the Industrial Strategy is the government’s new plan – the Plan for Growth This was designed to be owned and delivered by the Treasury and was presented as an ambitious plan to use skills, innovation and infrastructure to achieve economic growth that addresses regional inequality and achieves our decarbonization goals.

Almost a year on, how is the plan going?

Since taking on the brief, the Treasury (HMT) has been remarkably quiet about progress on its plan. Soon after last year’s spring budget, the Chancellor and Business, Energy and Industrial Strategy (BEIS) secretary published a joint letter in response to widespread disappointment in business communities, stating that “The plan for growth builds on the best of the Industrial Strategy.”

Yet the latest data provided by BEIS and HMT on their staff headcount shows worrying signs that the Treasury is not serious about its Plan for Growth. 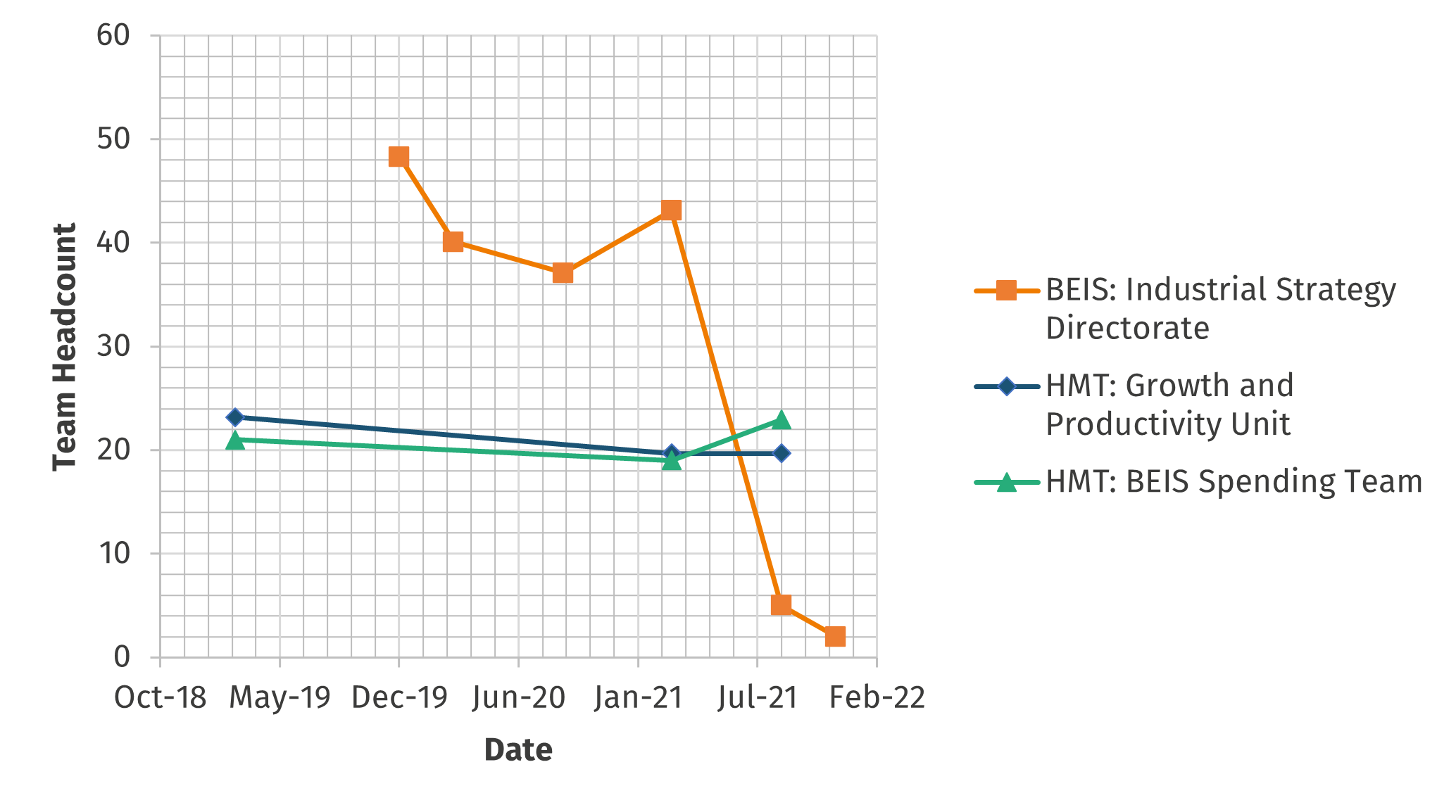 When BEIS lost the Industrial Strategy brief it disbanded its Industrial Strategy directorate who worked to the Director General for Industrial Strategy, Science and Innovation. From its peak in March 2021 with a headcount of 43 (full-time equivalent), the team had shrunk to just five by September 2021 and two by the end of the year. Worryingly, upon taking on the brief, the Treasury team responsible has remained at the exact same headcount over the same March to September period.

When Permanent Secretary Tom Scholar and Second Permanent Secretary Charles Roxburgh were quizzed by the House of Commons Treasury Select Committee in December last year, committee chair Mel Stride MP asked what the department was doing now that it wasn’t doing before it had the Plan for Growth. Tom Scholar responded “we have for many years had an enterprise and growth unit … they were the people in the Treasury who led the work on the plan for growth and led the discussions across Government on it. That, in a nutshell, is the plan for growth.”

However, new IPPR analysis of headcount data shows that the team responsible didn’t expand by a single member of staff upon taking on this important brief. Despite the disbandment of an almost 50-person team in BEIS, the Treasury took on the brief with such little seriousness it didn’t even hire a single new recruit.

"Despite the disbandment of an almost 50-person team in BEIS, the Treasury took on the brief with such little seriousness it didn’t even hire a single new recruit"

Even if these team headcounts don’t reflect the full number of staff working to deliver the Plan for Growth, as both the BEIS spending team and the Growth and Productivity team have wider responsibilities, a reasonable estimate would place the number of civil servants working on achieving the ambitious Plan for Growth at around five. This represents an almost 90 per cent reduction from the size of the BEIS Industrial Strategy team.

These numbers obviously do not tell the whole story – a large part of industrial policy is coordination across government and requires broad engagement from staff across departments. But it does give credence to a suspicion many have that the Plan for Growth was really the Treasury reverting to its position of open hostility to activist industrial policy. Despite Scholar’s claims that “[the Treasury] have always been the economics ministry”, many in Whitehall recognise that HMT’s responsibility to invest in long-term economic growth frequently takes second or third place behind its other roles as a fiscal ministry and finance ministry, and that HMT was really never happy with BEIS having any directional economic capacity at all.

This paints a wider concerning picture of a government unconcerned about stagnant levels of investment and economic growth post-pandemic. Economic growth, and more broadly productivity improvement, should sit at the heart of our economic recovery from the pandemic and drive to improve living standards. Shadow Chancellor Rachel Reeves has recently called into question the government’s lack of concern over low growth projections and their implications, condemning the government as “the party of high taxation, because they are the party of low growth.”

IPPR have repeatedly called for an ambitious industrial strategy aiming to improve investment, technology adoption and productivity across the private sector to deliver sustained economic growth and improved living standards.

Having an empowered and well-staffed team of civil servants working to deliver this is an essential requirement. These latest figures show a worrying level of neglect of the UK’s long term economic growth.

George Dibb is head of the IPPR Centre for Economic Justice

HMT headcounts include all junior staff in the BEIS spending unit and the Growth and Productivity unit respectively and senior staff including Deputy Directors for Growth and Productivity but not the Director for Infrastructure and Growth. For the year of 2019, prior to the foundation of the BEIS spending unit we have counted the Corporate Finance, Business, Energy & Industrial Strategy unit as equivalent.

The R&D investment challenge: Moving towards a more research-intensive economy