The poorest 10 per cent of households across the UK will be pushed into ‘fuel stress’ despite the Treasury’s plan to offer £350 relief across the board in an attempt to dampen the impact of today’s price cap rise, IPPR has found.

Almost all of those in the lowest income decile face spending more than 10 per cent of their disposable income on heating and electricity bills, according to analysis of the Treasury proposals by the think tank. For the least energy efficient homes in this income group, households could be spending up to 19 per cent of income on energy bills even with government support.

IPPR also flagged potential pitfalls in the across-the-board loan schemes designed to smooth the energy price rise over a longer period, including the risk that energy prices would not fall again before the loans need to be repaid.

The plan to target income support to those living in homes in council tax Bands A to D means that those on low incomes living in higher band properties will not automatically benefit. IPPR analysis shows 2.2 million of the poorest people are in this situation and will have to apply for discretionary support.

Meanwhile 44 per cent of those with the highest household incomes – the top 10 per cent - would get a tax cut, despite being less in need. Almost half of those living in houses in bands A to D earn above average income (see chart in Notes).

The think tank is calling for alternative ways to address the crisis including:

“The chancellor’s proposals announced today to support households are poorly targeted and amount to a sticking plaster that’s already full of holes.

“Our analysis shows that even if every household were to get the maximum £350 possible under the government’s scheme, most of the poorest households in the bottom 10 per cent will still be in fuel stress spending more than a tenth of their income on fuel. In the very worst cases, the poorest households could be spending as much as 19 per cent of their incomes on fuel - a potentially catastrophic hit to their living standards.

“In the short-term, the chancellor would have been better off by moving legacy green levies into general taxation and providing targeted support to low-income households through an increase and expansion of the Warm Homes Discount.

“In the long-term, the government should also be investing far more in measures to improve energy efficiency and clean energy and reducing the reliance of the UK on gas.”

On the council tax rebate scheme, George Dibb, Head of the Centre for Economic Justice, said:

“The plan to provide lower income households council tax rebates - a system that relies on property values decided when the chancellor was just joining secondary school - is poorly targeted. Our analysis shows that 2 million of the poorest people would miss out from automatic help and have to apply for discretionary support. At the same time, 44 per cent of the richest will benefit from a tax cut through this unfocussed scheme.

“Even with the support scheme announced today those on low incomes and in the most poorly insulated homes will suffer an enormous hit to their living standards from the sharp rise in energy prices. Far better would be for the government to increase the Warm Homes Discount to low income families who already receive it, and extend it to a further 6.6 million households in greatest need.”

Available for interview today are: 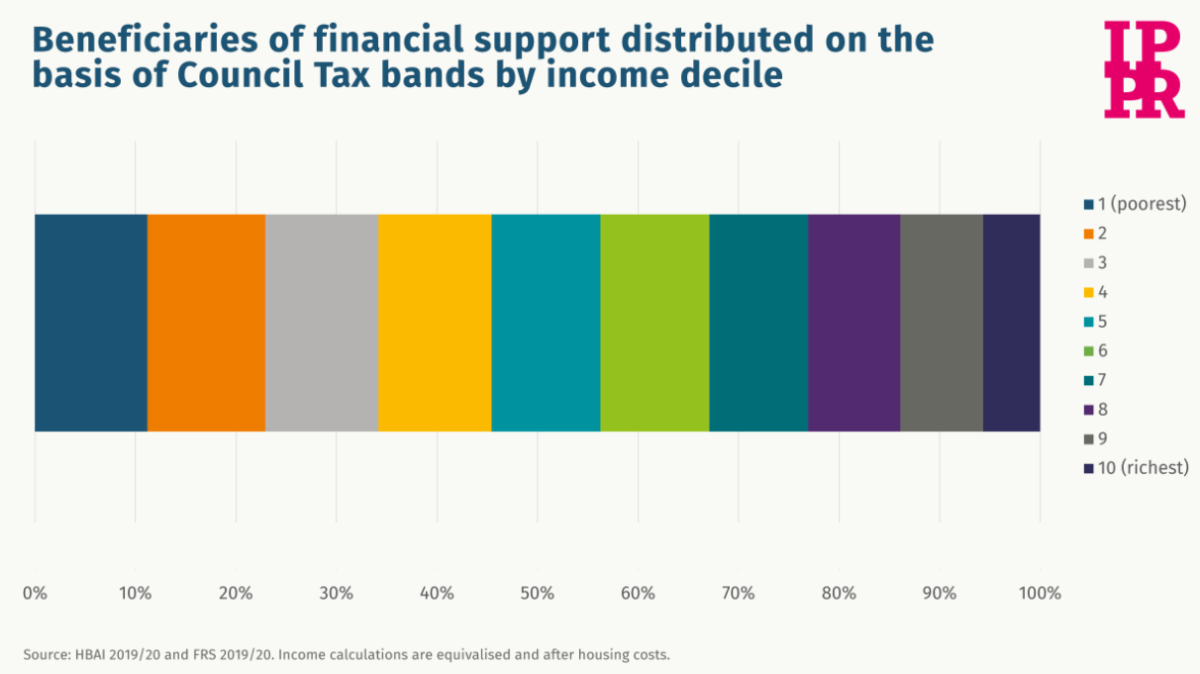 4. IPPR is the UK’s pre-eminent progressive think tank. With more than 40 staff in offices in London, Manchester, Newcastle and Edinburgh, IPPR is Britain’s only national think tank with a truly national presence. www.ippr.org