One in eight employed before pandemic are now out of work, more than twice the UK average, according to new analysis by think tank

People from black, Asian and other minority ethnic communities are most at risk of financial problems and rising debt caused by the Covid-19 economic crisis, according to new analysis by the IPPR progressive think tank.

They are twice as likely to expect to have difficulty paying their usual bills and expenses in the next three months, and more than twice as likely to have lost their jobs or otherwise stopped paid working during the crisis. They are also 50 per cent more likely to be renters than the wider population, so will have gained less from emergency mortgage holidays and are at greater risk of eviction as a result of rent arrears.

The significantly higher financial impact on ethnic minorities comes on top of the disproportionate health effect of the virus itself on the same communities, with more people likely to be exposed to the virus and a higher proportion likely to become seriously ill or die - creating what IPPR researchers say is a “double whammy”.

The research is part of a wider project on the growth of indebtedness and problem debt across the UK, whose full findings will be published later this year. Drawing on data from a regular survey of UK households and a special survey carried out soon after the first peak of the pandemic, IPPR analysis found:

Chart: Ethnic minorities are more than twice as likely to expect difficulty paying their bills over the next three months 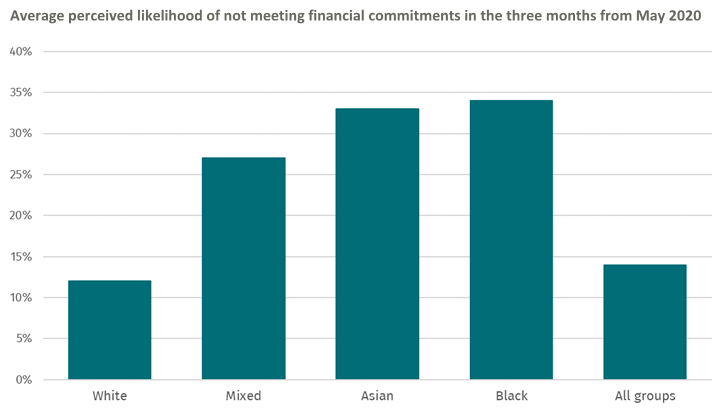 Source: IPPR analysis of Understanding Society Covid Wave 2. “Not meeting financial commitments” refers to individuals saying that they expect to “have difficulty paying their usual bills and expenses”.

Shreya Nanda, IPPR Economist and an author of the blog report, said:

“Without further intervention we are on course for a new debt crisis, from which black, Asian and other minority ethnic people are particularly at risk. Many in these communities are likely to experience financial difficulty in the months ahead, and to be vulnerable to eviction as a result of rent arrears. Such economic insecurity risks compounding the already disproportionate health impacts borne by people with minority ethnic backgrounds during this crisis - effectively a ‘double whammy’.”

Anna Round, Senior Research Fellow, co-author who is leading the research project, said:

“It’s crucial to understand how vulnerable different groups are to the growing risk of debt as a result of the coronavirus crisis. What this tells us is that people from black, Asian and minority ethnic communities are most exposed to indebtedness, with all the problems that can bring on top of the greater health issues they already face.

“We are now undertaking further research that will enable policymakers to gauge what kind of interventions would best protect these groups, as well as others most vulnerable to the economic effects of the crisis. Action will be needed to prevent minority ethnic communities in particular from falling into a damaging spiral of financial insecurity and problem debt.”

Anna Round, IPPR Senior Research Fellow, and Shreya Nanda, IPPR Economist, two of the blog’s authors, are available for interview