The new electorate: Why understanding values is the key to electoral success

This new and sophisticated view of the British electorate provides a picture of voters in terms of their dominant, deeply held values, and of how these 'values groups' relate to party loyalties, headline issues, and the crafting of strong political messages and coalitions of support.

'Pecorelli's perspective points to the importance of engaging with the deeply held concerns and sentiments of broad groups of the electorate and the need to develop messages and strategies which build common concern among them. Camping out in narrow sections of the electorate will not work for those seeking an electoral majority or aiming to govern in the national interest.'
Foreword, by Nick Pearce and Graeme Cooke

Unlike the US, Britain has a very evenly divided electorate, with around a third of voters in each major group. This highlights the need for politicians to bridge the divides between voter groups; targeting any single group is not a recipe for electoral success.

Each of the main voter groups can then be broken down into four subgroups (visit The Campaign Company website to take the test for yourself). Analysis of recent trends shows that the 'louder' groups, with more divergent, strongly held views, are becoming predominant over the 'quieter' groups with a more centrist perspective. The six 'loud' groups are the primary focus of this report: the Alienated and Traditional Settler, the Concerned and Confident Pioneer, the Socially Conservative and Socially Liberal Prospector.

Using this model, the report outlines: 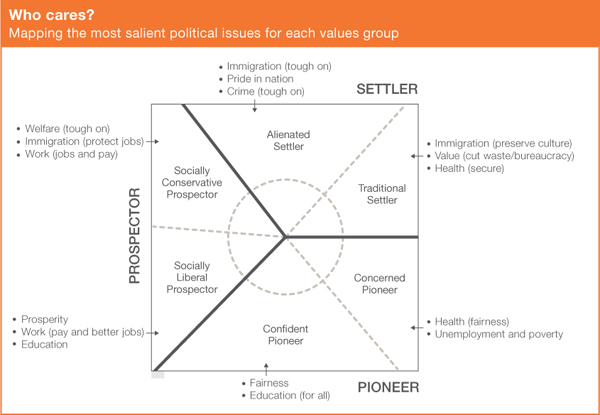 This new analysis by The Campaign Company is based on four decades of findings from the British Values survey, four polls conducted in 2011 and 2012, and over 200 focus groups.