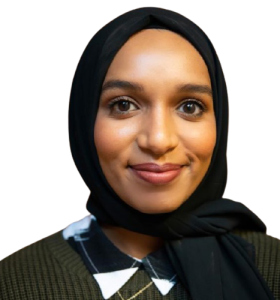 Amreen is a research fellow, working across IPPR North, and the migration, trade and communities team.

Amreen was a key contributor to the report Beyond the hostile environment which analysed Home Office policies that contributed to the Windrush scandal, and proposed ways to reform current systems of immigration enforcement. She also was an author on IPPR North’s 2021/22 State of the North: Powering northern excellence playing a role in tracking the progress and delivery of the promises made under the ‘levelling up’ agenda.

Amreen has appeared on BBC, ITV and Times Radio, and her writing has been featured in the Guardian and on the Fabian Society blog.  She is also a member of the NEON spokesperson network.

Prior to joining IPPR North in 2019, Amreen carried out research work on the humanitarian sector with Trust Consultancy. She has also worked across the charity sector and was a volunteer mentor for migrant women at Refugee Action. She is an experienced campaigner and events coordinator.

Amreen has an MA in Humanitarianism and conflict response from the University of Manchester and a BA in politics and international relations from Lancaster University.

Amreen’s areas of expertise are:

Building the foundations for social connections in Yorkshire and the Humber

Understanding the rise in Channel crossings