Breaking the 'Red Wall': What the 2022 local elections tell us about the politics of the North and the Midlands

The Westminster commentariat has been quick to dissect the 2022 local elections. As night follows day, the narrative has quickly pivoted to what these results might mean for this government’s future, as well as Labour’s future electoral prospects. At the centre of this has been the elusive ‘Red Wall’, a term that has become increasingly prevalent since 2019. Unhelpfully, it is sometimes used to refer to different geographies, but usually encompasses the former Labour seats across the north of England, the Midlands and north Wales which switched from Labour to the Conservatives at the last general election. Too much talk of the ‘Red Wall’ is vague, homogenising and unhelpfully tells us little about the actual identities people have and the values and attitudes which inform voting behaviour. It is local and regional identities which tell us more.

In this post-election analysis, we look specifically at those parts of England, the North and the Midlands, which have commonly been characterised as ‘Red Wall’ places. We analyse the local election results in the context of new polling commissioned by IPPR in those places that switched from the Labour party to the Conservative party at the 2019 general election. This will help put the recent local elections into context, and demonstrate the extent to which the major parties are perceived to understand local areas and what lessons we can learn from these elections for future elections.

Identity matters, but it isn’t homogenous

These local elections paint a mixed picture for the political parties. Overall, the Conservatives lost a significant number of seats across the South of the country. While they managed to hold their position in important places across the North, such as Hartlepool, they also lost seats in places such as Kirklees and North Yorks. Labour did extremely well in London and also won back important council seats in the North. However, their vote was also challenged by other progressive parties in places like Sheffield. The Liberal Democrats performed well at these elections as did the Greens.

At face value, there is no obvious pattern to these results. Yet on closer inspection, it seems that those candidates who connected well with their local electorate performed well. Candidates that demonstrated they share voters’ values and understand their communities are far more likely to appear ‘authentic’ to voters, and subsequently secure their vote. However, all places are different, and people often hold overlapping national, regional and local identities. The ‘Red Wall’ isn’t a shared identity in the same way. Let’s take the example of Yorkshire. People have a sense of identity linked to being from Yorkshire and how this contrasts with other parts of the country. However, people also have identities linked to specific parts of Yorkshire, whether that’s South or West Yorkshire, as well as local identities within these places formed around cities like Sheffield and towns like Halifax.

Voters’ identities are also strongly connected to their social attitudes and values. However, values are not fixed. The Red Wall shorthand means the North and the Midlands are often characterised as one homogenous place. While the Conservatives appeared to resonate more with voters and their values across the North and the Midlands at the 2019 general election, these local election results suggest that this increasingly may not be the case.

Polling* conducted by Survation on behalf of IPPR North and IPPR sheds further light on the extent to which the major political parties were perceived to resonate with people and their local area. This polling helps us understand what these elections might mean for future elections as it also covers those places that switched from Labour to the Conservatives in 2019 but might not have held local elections this time round. This polling suggests the Labour party is currently seen as the party that best understands these places, with 42 per cent of those polled feeling the party understood their local area very or fairly well.

Figure 1: Responses to the question: ‘How well or badly do you think the following political parties understand your local area?’ 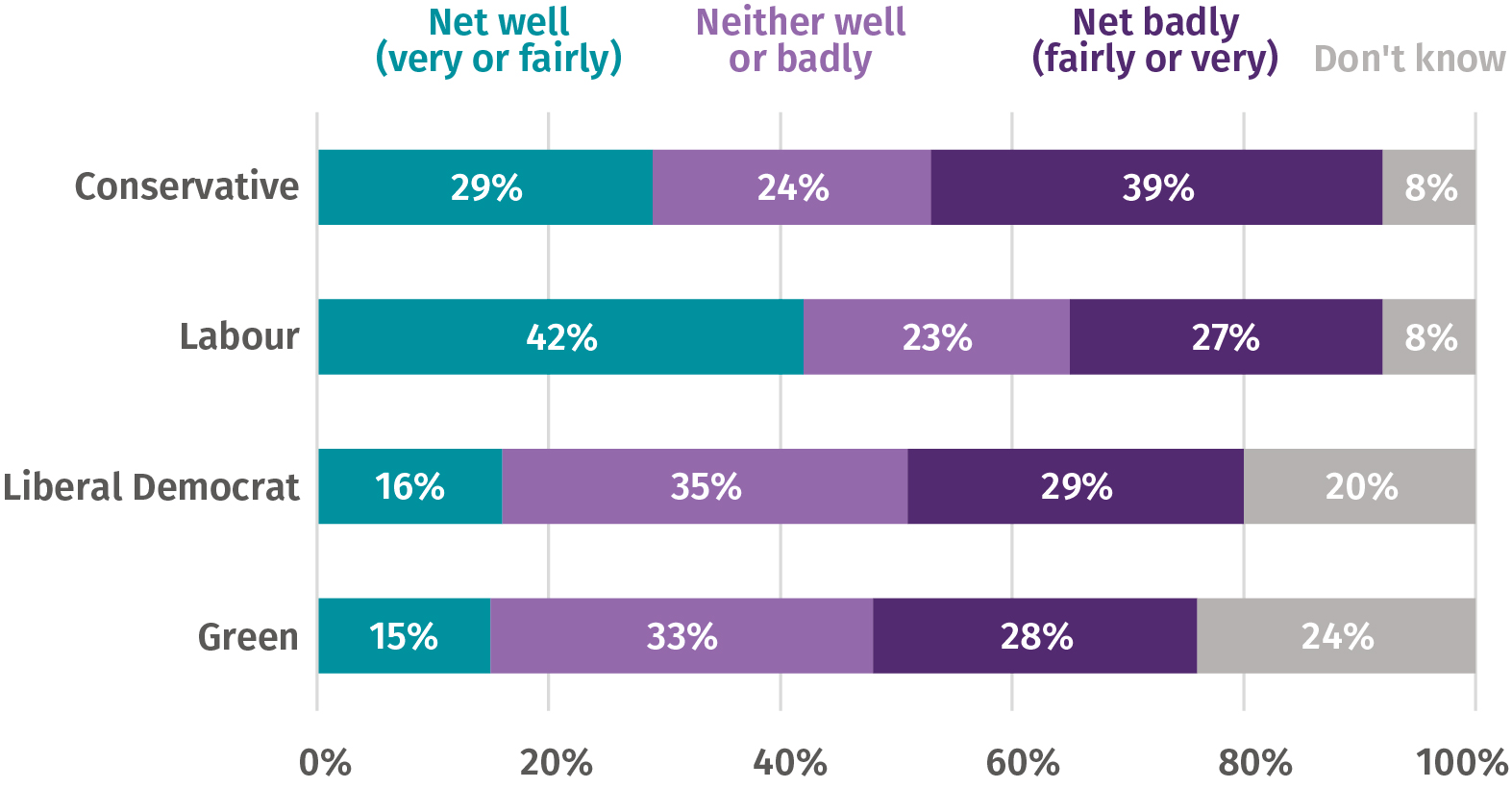 This further helps us place these local election results into context. Despite the modest gains for Labour across the North and the Midlands in the local elections, our polling suggests that they’re the party that is currently perceived to best understand these parts of the country. Picking up important council seats in places like Cumberland show that Labour is making progress in parts of the country they would need to win at a forthcoming general election to gain a majority. However, this must also be weighed up against the fact they lost seats in places like Hull and saw their share of the vote decline in Barnsley. In sum, none of the votes in these key seats can be taken for granted.

Voters are also likely to favour political parties that are perceived to share their values. The Conservative party achieved success in the 2019 general election by leaning heavily on socially conservative values and a ‘Leave’ identity. However, our polling suggests that at this moment in time, it is not the party that is seen to share the values of voters in those seats it won at the 2019 general election.

Figure 2: Responses to the question: ‘To what extent do you think that the following political parties share your values?’ 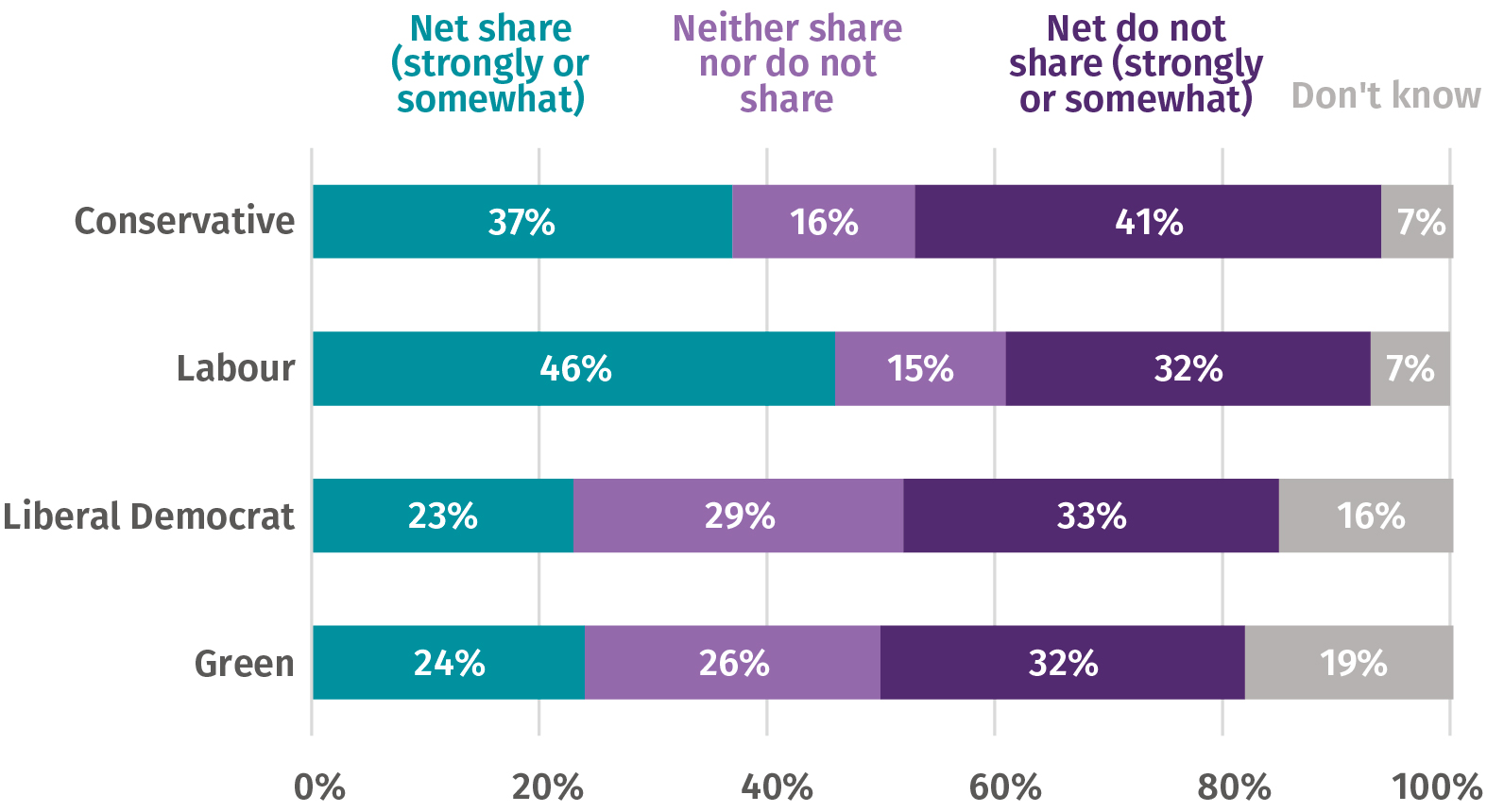 Despite the government’s levelling up agenda – a clear attempt to reach those parts of the North and the Midlands that have for too long been ignored by central government – voters, according to new polling, currently feel like the Labour party are the party that better understands their local area and are the party that shares their values. A strong showing for Labour in parts of West Yorkshire, which last year elected its first metro mayor, may also point to the national parties benefiting from these regional leaders who can stand behind a strong track record of delivery across different wards and constituencies. This might also explain why the Conservative vote held in places such as Hartlepool, which is also represented by a Conservative Tees Valley metro mayor.

Candidates that campaigned heavily on local issues did well at these local elections. This was clear in places like South Yorkshire where transport was a major issue that both successful council candidates and the newly elected Mayor of South Yorkshire campaigned heavily on. National politics nevertheless did feature strongly at this election. However, it was unlikely to be in the way that the major political parties wanted. The further you get from Westminster the less trust people place in MPs. Many voters simply do not trust central government to put the needs of the country first.

Table 1: Responses to the question: ‘How much do you trust British governments of any party to place the needs of the nation above the interests of their own political party?’

Despite growing apathy with Westminster and central government, voters still want election candidates to speak to both national and local issues. Our polling shows that the relationship between national and local politics is overlapping and, even at local elections where we might expect local issues to be the primary driver of voting behaviour, national issues are just as important to voters. As a result, parties must increasingly balance their position on national issues with their ability to understand local issues. This suggests that successful candidates are far more likely to win if they campaign on local issues, while also speaking to current national issues, such as the cost of living crisis, and relate this back to the local context and how it will impact peoples’ lives.

Figure 3: Responses to the question: ‘When it comes to voting in the upcoming local elections, do you think you are more likely to vote for a candidate on the basis of mainly national issues or mainly local issues?’ 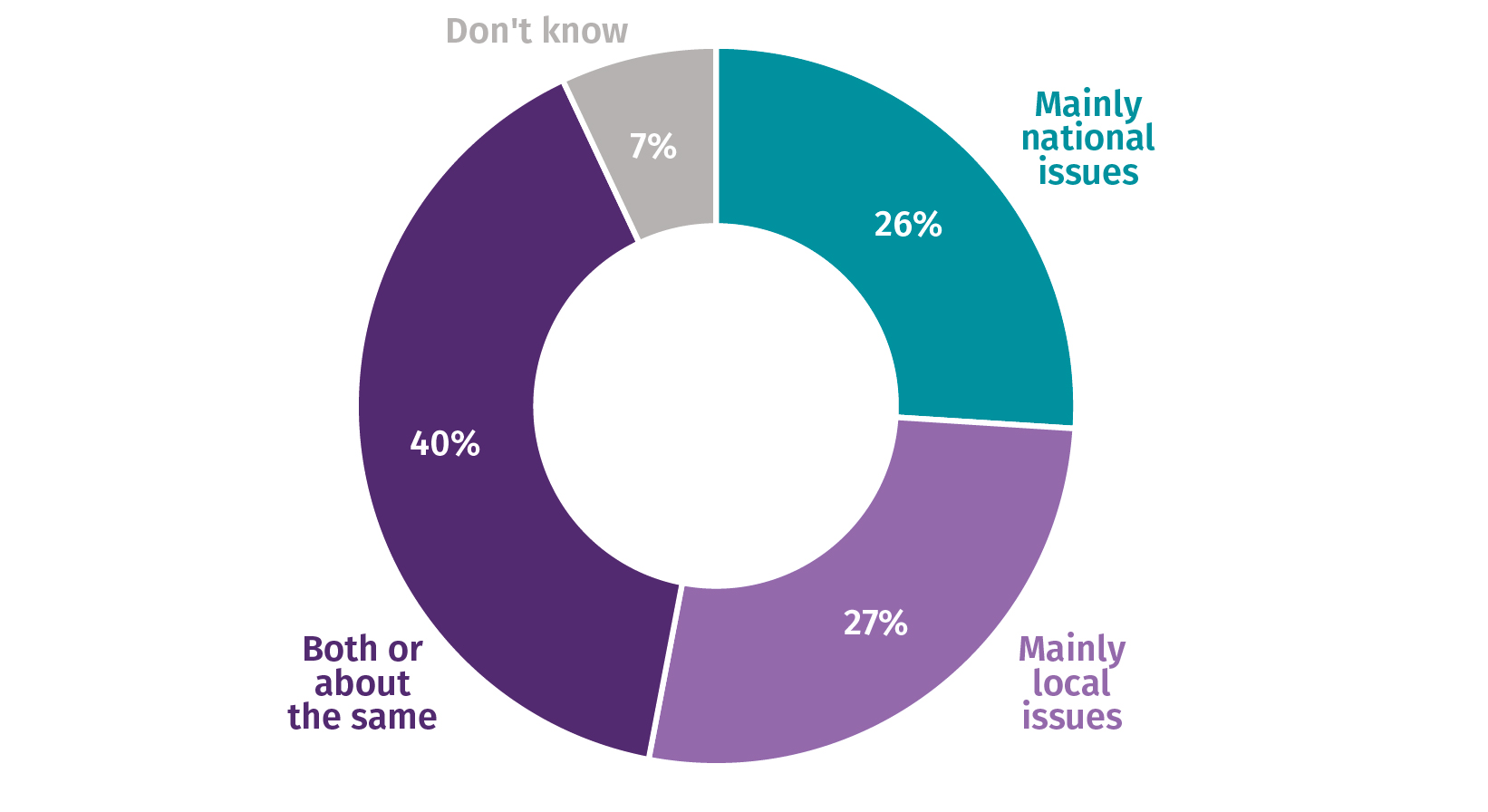 Talk of the ‘Red Wall’ is unhelpful, making generalisations about people and places across areas in the North and Midlands. Beyond describing a large geographic area, it tells us little of the individual places that make up these regions and the key factors that drive voting behaviour. Instead, commentators and political parties alike should look to the local and regional identities that better tell us what people want.

Voters cannot be taken for granted and, far from being defined by single issues, are likely to favour election candidates they feel understand them and their local area. The fact that people wanted local election candidates to speak to both national and local issues suggests that parties are unlikely to do well in future elections unless they have both a strong local and national policy platform that responds to key issues. The interplay between these local and national issues also suggests that place-focused policy agendas like levelling up could be clear vote winners. However, these election results suggest that levelling up is still a long way from moving from rhetoric to reality and has, so far, not transformed the electoral landscape.

Jonathan Webb is a senior research fellow at IPPR North. He tweets @jrkwebb. Emilia Lavis and Nia Hunt are undergraduate students at the University of Sheffield and were project interns who worked on this research.

*Survation polled 1,015 residents aged 18+ living in the ‘Red Wall’ area for IPPR North. Survation defined for this poll the 'Red Wall' as seats in the north of England and Midlands which switched from Labour to Conservative at the 2019 General Election. The data was analysed and weighted by Survation. It is weighted to the profile of adults aged 18+ in the ‘Red Wall’ area by age, sex, region, 2019 General Election vote and 2016 EU referendum vote. For more on Survation, visit: https://www.survation.com/.