IPPR Scotland analyses potential Conservative party, Scottish Liberal Democrat and Scottish Labour tax proposals in advance of elections in May. (The SNP and Scottish Greens have yet to outline their income tax plans.) We find that plans to increase income tax are redistributive to varying degrees, with the options of matching UK Conservative plans being highly regressive. Under existing powers, those on the left in Scotland may face a ‘devil’s choice’ between doing nothing – and seeing UK Conservative tax cuts for the highest earners fully implemented in Scotland – or doing something to raise income tax, and thus creating marginal increases for middle and potentially lower earners too. New powers, if agreed, would open up greater possibilities to respond in a more targeted way.

With only three months to go until the Scottish parliament elections, we are beginning to see glimpses of what tax plans might be in the political parties’ manifestos. With the financial arrangements underpinning potential new powers for Scotland still being negotiated between the UK and Scottish governments, and with the Scottish parliament’s budget not finalised until later in February, there are a few hurdles to jump through before we get to the election, but we have analysed the effects of these potential policies over the course of the next Scottish parliament, to 2020/21.

Scotland’s political parties have been busy looking at how Scotland’s current and potential tax powers could be used; busier than we have seen for some time. And all sides have been keen to define their own proposals as progressive or their opponents’ as regressive. This is as much about Scottish political language as a technical description, with all parties wishing to be described as ‘progressive’. In Scotland, it seems, progressive equals good and regressive equals bad, across the political spectrum. As Scotland’s new independent, cross-party progressive thinktank, we obviously see this as a laudable aim.

So far we have seen some initial income tax policies from the Scottish Liberal Democrats and Scottish Labour. We have also seen some potential ideas from the Scottish Conservatives’ Independent Tax Commission, with proposals to at least match the tax take of the rest of the UK in Scotland. Interestingly, deliberately or not, all these proposals would work as well under existing powers as they would under the new tax powers potentially coming to Scotland.

IPPR Scotland will publish an in-depth report looking at tax and benefits next month. In advance of its release, we have used IPPR Scotland’s tax and benefit model to analyse the effect of the three proposals in terms of who would win and lose in financial terms across the income spectrum, and to track that to 2020/21, the last year of the next parliament. 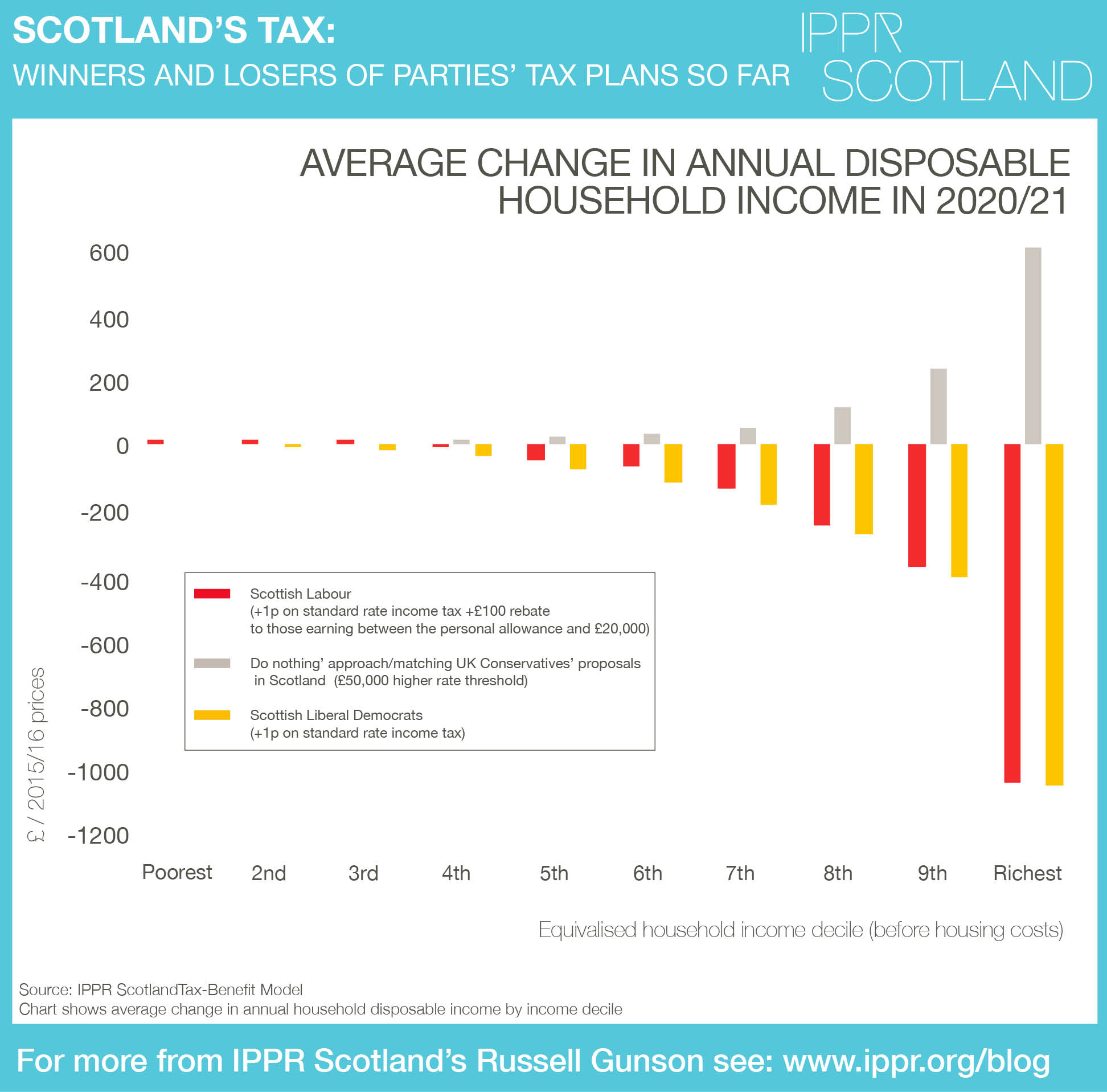 It should be noted that matching UK government plans would happen by taking a ‘do nothing’ approach under existing powers (the approach we have seen since the Scottish parliament’s inception), as under current arrangements tax thresholds are set by the UK Government across the UK. Under potential new tax powers for Scotland, matching UK government plans would, in contrast, require an active decision. This means that, without new powers, Scotland’s progressives may only have the ‘devil’s choice’ of doing nothing, and thus passing on tax cuts for the highest earners, or doing something by increasing taxes across all bands, and thereby increasing tax for at least middle if not lower earners too. On the other hand, the proposed set of new powers would open up the possibilities for a more tailored, Scotland-specific approach to income tax. That is why the current UK and Scottish government negotiations are so critical.

So far the SNP and Scottish Greens have not made clear their plans for future income tax changes. We will no doubt see these once we know when or if new powers are coming to the Scottish parliament, and as manifestos are published in advance of May.

For Scotland, matching the UK government’s tax plans would reduce tax for the rich but not the poor; the proposals of the Scottish Liberal Democrats and Scottish Labour would increase tax on the rich but not on the poor. However, what is politically progressive or regressive – or as the term is sometimes used, what is right and wrong – is obviously more open to debate. Is it right or wrong to ask low and middle earners to pay more tax, regardless of how much more the richest pay? Is it right or wrong to leave tax rates as they are, limiting the ability to reduce spending cuts in Scotland? Is it right or wrong to match UK-wide tax cuts for middle and, particularly, higher earners at a time of benefits cuts and deep public spending cuts? In the event that new powers are not agreed, is it right or wrong to take a ‘do nothing’ approach on tax, allowing UK-wide tax cuts for the highest earners to be passed on in Scotland, or should Scotland instead take a ‘do something’ approach to try to mitigate that change?

Regardless of these judgments, the facts are clear in terms of who wins and who loses from the proposals we know about so far. Our future work will look at how much would be raised or lost through potential tax changes, within the context of the challenges facing Scotland in terms of public spending cuts and benefits cuts. Whether new tax powers for the Scottish parliament are agreed or not, the debate around tax in Scotland has begun in earnest. Where Scotland ends up, and the balancing of priorities between tax rises, benefits cuts and public spending cuts look set to dominate the election, and political debate, in the run-up to elections in May.

Using income tax powers in Scotland can be progressive