Productivity - In 2010, on average, workers in the North East produced goods and services worth £26 per hour. In 2017, this had risen to £30 per hour. This equates to growth of 2.2% per year, which was the second-fastest growth in the UK, joint with the West Midlands and exceeded only by Northern Ireland.1

This fall is partly explained by the loss of manufacturing jobs in the North East, where trade union membership was traditionally high. The number of workers in manufacturing in the North East has fallen from around two in ten workers in 1998 to just one in ten in 2018 – a loss of 70,000 jobs. This is a similar but slightly larger fall than across the UK as a whole. Other sectors have been growing however, with administration, education and health and social work contributing the highest numbers of new jobs since 1998.3
Skills - In the North East, three in ten working-age adults have a degree or equivalent qualification. This is the lowest level in the country. Across the UK as a whole, four in ten adults have a degree. The gap between the North East and the rest of the country has been slowly widening over time.4 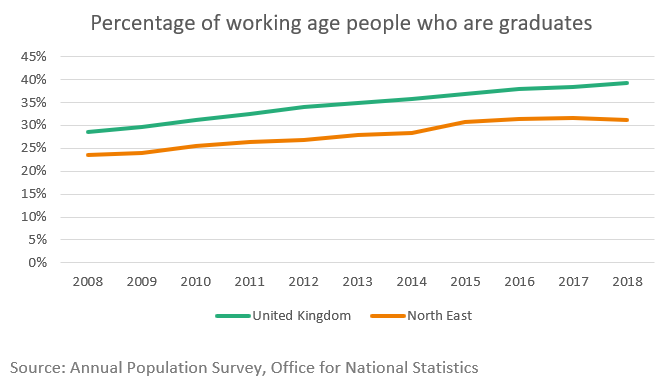