As Scotland’s schools begin to return following the Covid-19 lockdown and as colleges and universities gear up for the next academic year, many young people and their families will be looking ahead to a new term unlike any other before. But for those young people leaving education and looking for work, the jobs market they are stepping into is among the toughest on record. Without question, Scotland – like the UK as a whole – is likely on the brink of a youth unemployment crisis unlike anything we’ve seen before. This crisis requires an urgent and significant response over the coming weeks and months.

What’s the scale of what we might be facing? While we don’t yet have Scotland forecasts for unemployment, the latest forecasts from the Office for Budget Responsibility (OBR) foresee significant increases in unemployment across the UK. If accurate, they would see UK unemployment peak at a staggering 11.9 per cent in the last quarter of 2020, with very little improvement well into next year, and unemployment staying well above pre-crisis levels for years to come (OBR, 2020). This is a huge increase on the 4 per cent unemployment rate going into the Covid-19 crisis and on forecasts as recently as March – just before the pandemic hit the UK. Far from the v-shaped economic “bounce back” initially anticipated by the Bank of England amongst other forecasters (BoE, 2020; HMT, 2020), the OBR’s assessment is now that unemployment is likely to remain considerably higher than pre-crisis levels for as far into the future as 2025. Even worse, this is only the OBR’s central scenario. There remains considerable risk that even this scenario could turn out to be overly optimistic.

Unemployment is projected to peak at 11.9 per cent in the last quarter of the year in the OBR’s central scenario

This could again, however, be an overly rosy picture. For example, if the OBR’s central scenario proves to be optimistic, and unemployment as a whole is higher than forecast, we would expect youth unemployment to be higher too. Even if this is not the case, there is already considerable evidence that this recession has hit young workers across the UK particularly hard, given the sectors hardest hit by lockdown and ongoing restrictions are also the sectors that employ the highest proportions of young people. On the other hand, forecasts may be pessimistic and, furthermore, young people may not be hardest hit by decisions taken by employers as we move into an expected jobs crisis later this year.

Youth unemployment could exceed 140,000 in a reasonable worst-case scenario 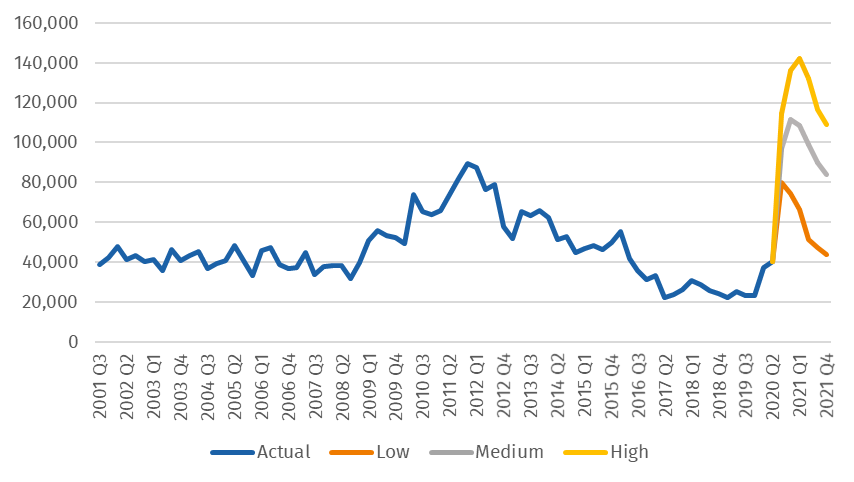 The ‘scarring’ effects of unemployment early in a young person’s career are well documented, with reductions in earnings compared to previous cohorts which many young people will not close over the rest of their working lives. There is strong evidence of this effect in recent work looking at the cohort of young people that entered the labour market during the financial crash (Resolution Foundation 2019). This sees significant and lasting economic damage for the young people concerned, but also for the economy as a whole, with large risks to health and wellbeing across Scotland.

The scale of the jobs crisis facing Scotland over the rest of this year and beyond may well be unprecedented. And with it the scale of youth unemployment, and the damage associated to it, could be unparalleled. We must therefore develop policy tools with the ambition that matches the scale of the challenge.

Over the coming weeks and months, the challenge policymakers in Scotland face is to find 100,000 additional opportunities for young people in Scotland for this next year. With summer coming to an end and the end of furlough approaching at the end of October, we only have a matter of weeks before the tidal wave of unemployment hits. If we are to avoid the lasting damage to our young people and to our economy that we’ve seen in the past, we will need to see employers, government, the college, school and university sectors urgently come together to protect as many young people as possible from the lasting damage of youth unemployment.

In our view this will need action on the following fronts to meet the scale of the ‘100,000 challenge’:

By working with employers, employees and across the skills system, the UK and Scottish governments must find ways to find 100,000 new opportunities for young people in Scotland, across education, training and jobs, to minimise youth unemployment, and prevent a jobs crisis becoming a youth crisis in Scotland.

Since late 2004, 18-24 year olds have made up around 30 per cent of the unemployed population across the UK including throughout the Great Recession (ONS 2020a) meaning changes to youth unemployment have occurred proportionally with changes in general unemployment historically.

On average around 8.5 per cent of the total youth unemployed caseload are resident in Scotland (though there has been some variation over that time - between around 12 per cent to 5 per cent) (ONS 2020b).

The assumptions underlying the 3 scenarios are as follows:

Covid-19: How are families with children faring so far?

What does Covid-19 mean for the labour market prospects of young people in Scotland?