Ethnic inequalities in Covid-19 are playing out again – how can we stop them?

Once again Covid-19 is running along racial lines. Despite the inequalities exposed earlier this year, there has been little effort to stop Covid-19 hitting minority ethnic communities hardest as we enter the second wave. Without urgent action, the effects of pandemic are set to be felt unequally again. Already the latest national infection rates are over four times higher in Pakistani communities than white communities. Addressing these inequalities – and reducing the impact of Covid-19 on black and minority ethnic communities – is an issue of racial justice. Our goal must be a fairer and more racially just society. But it is also a vital part of our efforts to control Covid-19. Structural inequalities fuel pandemics: addressing them is crucial to avoid more severe lockdowns.

The extra risk of death in minority ethnic groups is one of the starkest health inequalities in recent times. Between March and May 2020, men and women from all ethnic minority groups (except females of Chinese ethnic background) had a greater risk of death from Covid-19 compared to those of white ethnic background. The death rate was 3.3 times higher for black males and 2.4 times higher for black females compared to white males and females. To put this disparity into context, our analysis with CF healthcare consultancy estimates that over 2,500 deaths could have been avoided during the first wave in England and Wales if the black and south Asian populations did not experience an extra risk of death from Covid-19 compared to the white population (after adjusting for differences in age and sex). Put differently, we estimate over 58,000 and 35,000 additional deaths from Covid-19 would have occurred if the white population had experienced the same risk of death from Covid-19 as the black and south Asian populations respectively.

Comorbid diseases, like diabetes, don’t explain the inequalities. New analysis with CF finds that underlying diseases (such as heart disease, lung disease and diabetes) are not driving the inequalities. The prevalence of these diseases vary between ethnic groups, but when considered together, they do not explain the difference in risk of death from Covid-19 between ethnic groups (Figure 1). We estimate comorbidities lead to the black population being only five per cent more likely to die from Covid-19 than the white population. Higher deprivation levels explain the disparities to a greater extent, but the majority of the additional risk of death from Covid-19 experienced by minority ethnic communities is unexplained. This reflects the difficulty of linking health and social data, and the paucity of data on ethnicity. Some commentators have looked to fill this void with claims about genetic differences. But the evidence is clear – there is no genetic basis for race or ethnicity. Genetics cannot explain why every minority ethnic population, given huge genetic diversity within and between these groups, has a higher risk of death from Covid-19 than the white ethnic population. Instead, this inequality is likely to be driven by structural and institutional racism that results in differences in social conditions (such as occupation and housing) and differential access to healthcare.

Figure 1: Relative risk of death from Covid-19 attributable to deprivation, comorbidities and unexplained (these risks multiply rather than add)

We cannot resolve these inequalities overnight, but we can reduce them ahead of a second wave of Covid-19. The structural and institutional racism driving these inequalities cannot easily be undone. This requires new research to better understand the nature of these inequalities and a long-term shift in social attitudes as well as policy. But Covid-19 cannot be allowed to run unchecked through minority ethnic communities in the meantime. We do not have the luxury of waiting for initiatives such as the government’s new Commission on Race and Ethnic Disparities to act. We must take bold action to protect and support minority ethnic communities now.

We are calling on the government to set out a comprehensive strategy to mitigate ethnic inequalities this winter. Our research suggests this strategy should tackle two key inequalities:

There has been no concerted action to better protect minority ethnic communities from Covid-19. A survey earlier this year found non-whites groups were on average 18 per cent less likely to have heard of the government’s stay at home advice. Despite such evidence, the task of communicating and translating public health messaging has largely been left to voluntary groups and under-resourced local authorities. Our analysis finds that minority ethnic communities have suffered disproportionately from public health budget cuts in recent years. Since 2014/15, the ten most ethnically diverse local authorities have suffered over £15 million more in public health budget cuts compared to the ten least ethnically diverse local authorities (Figure 2). Ethnic disparities in Covid-19 are a manifestation of a longer negligence. As roll out of the NHS Covid-19 App risks exacerbating ethnic inequalities, the work of local teams to protect people in more vulnerable circumstances must be better supported.

We recommend that the government:

Figure 2: public health budgets have shrunk faster in the most diverse local authorities in England 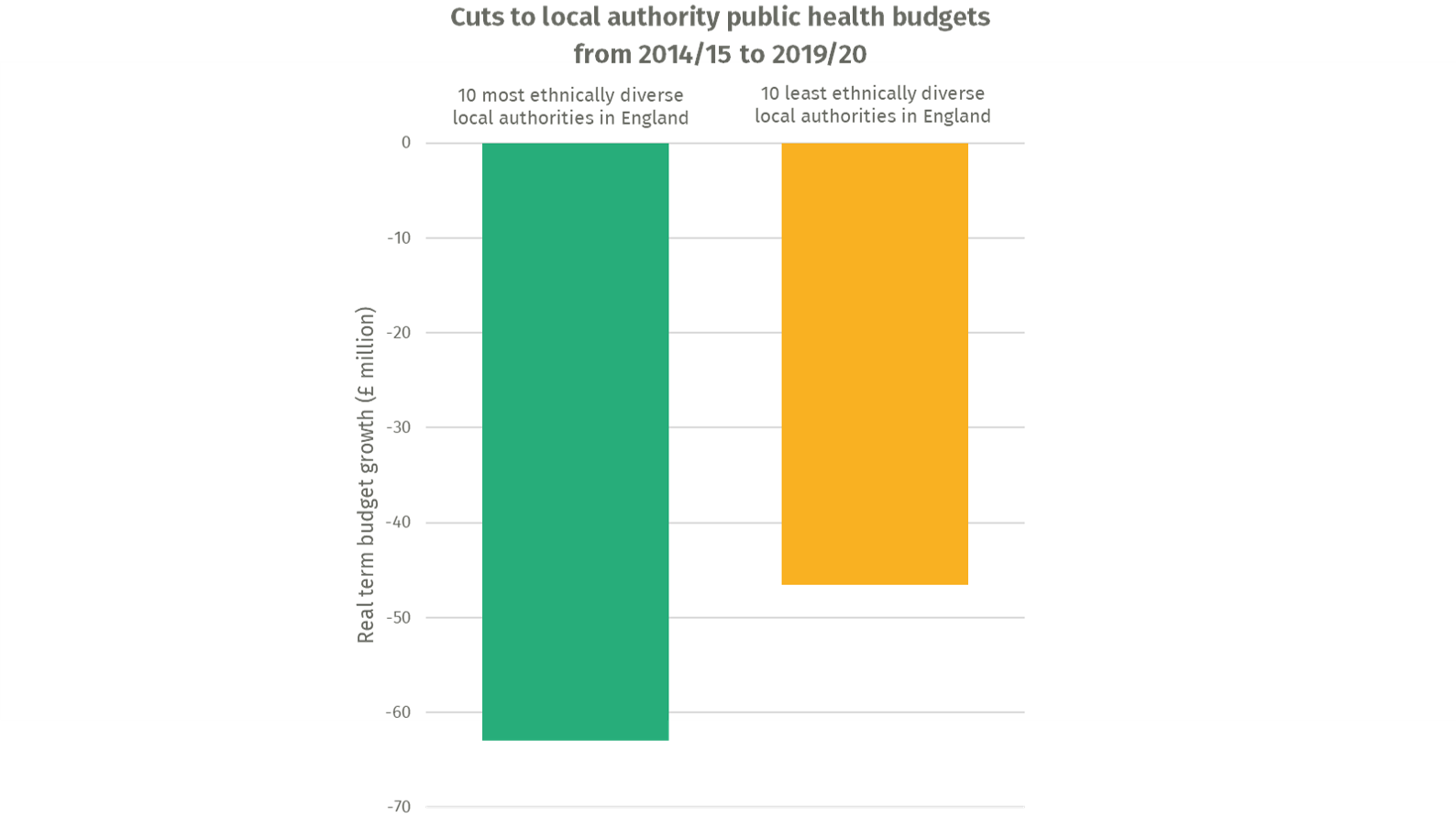 Many minority ethnic individuals find it harder to self-isolate because of the conditions in which they live and work. Nearly one third of Bangladeshi households and 15 per cent of Black African households are classified as overcrowded, compared to only 2 per cent of white households. Bangladeshi and Black African households also have only 10p for every £1 in savings held per White British household, and are more likely to expect difficulty paying their bills in coming months, meaning taking time off work to self-isolate is often unaffordable. Self-isolation is already difficult – less than 20% of people with Covid-19 symptoms isolate appropriately – but poor housing and financial precarity makes it almost impossible without additional support.

We recommend the government:

Barriers to accessing the NHS for minority ethnic groups must be removed. New research conducted with CF finds that non-white patients with Covid-19 are presenting to accident and emergency (A&E) more acutely unwell, with south Asian patients 35 per cent more likely and black patients 55 per cent more likely to need resuscitation or very urgent care than white patients (Figure 3). We also find that black patients are over twice as likely to be admitted to an intensive care or high dependency unit directly from A&E (Figure 4). This could be because these patients are not seeking timely healthcare, with late presentation leading to more severe outcomes. A recent Public Health England report found that adverse effects of the hostile environment, experiences of discrimination and distrust in NHS services have led to a reluctance in minority ethnic communities to seek care on a timely basis.

We recommend that the government: 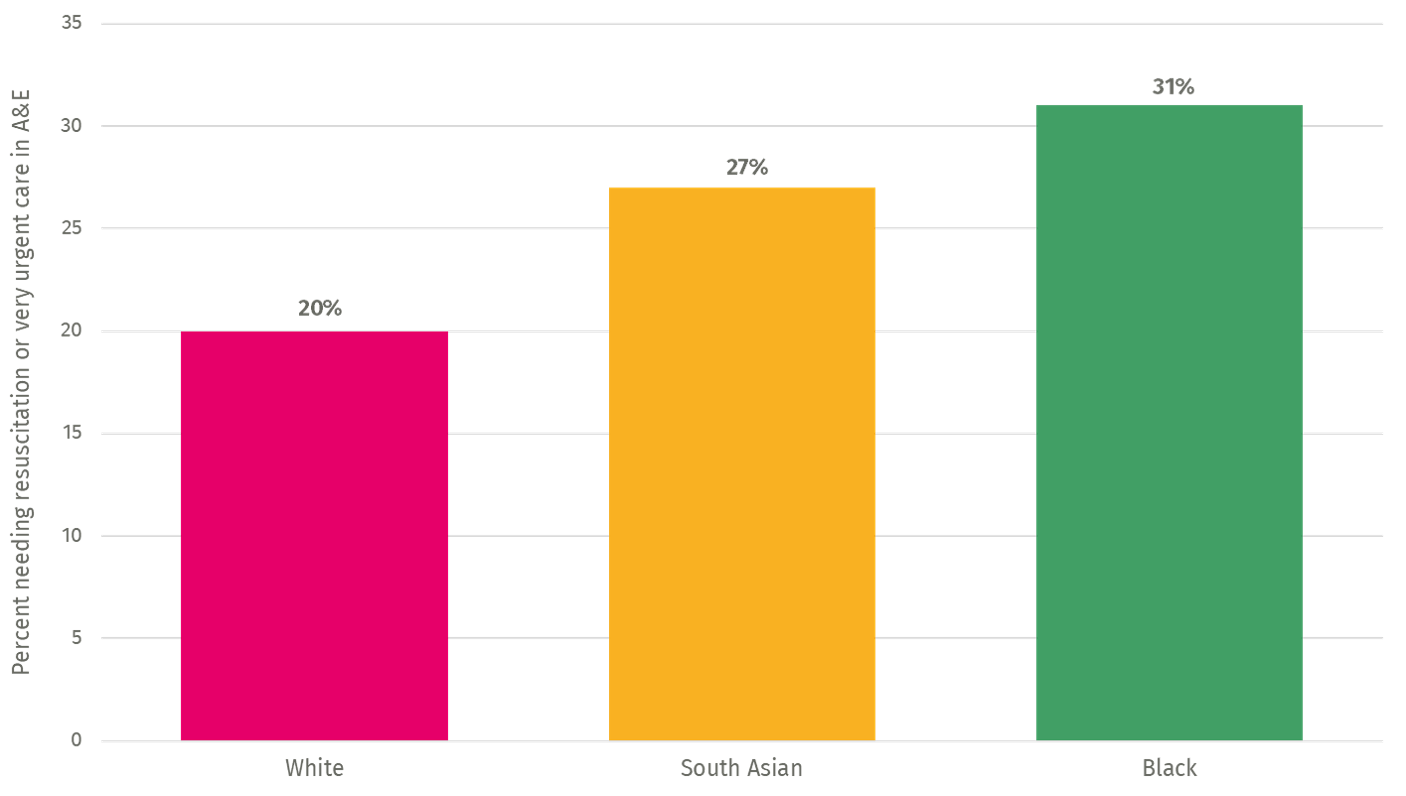 Figure 4: Patients admitted to an intensive care or high dependency unit directly from A&E by ethnicity 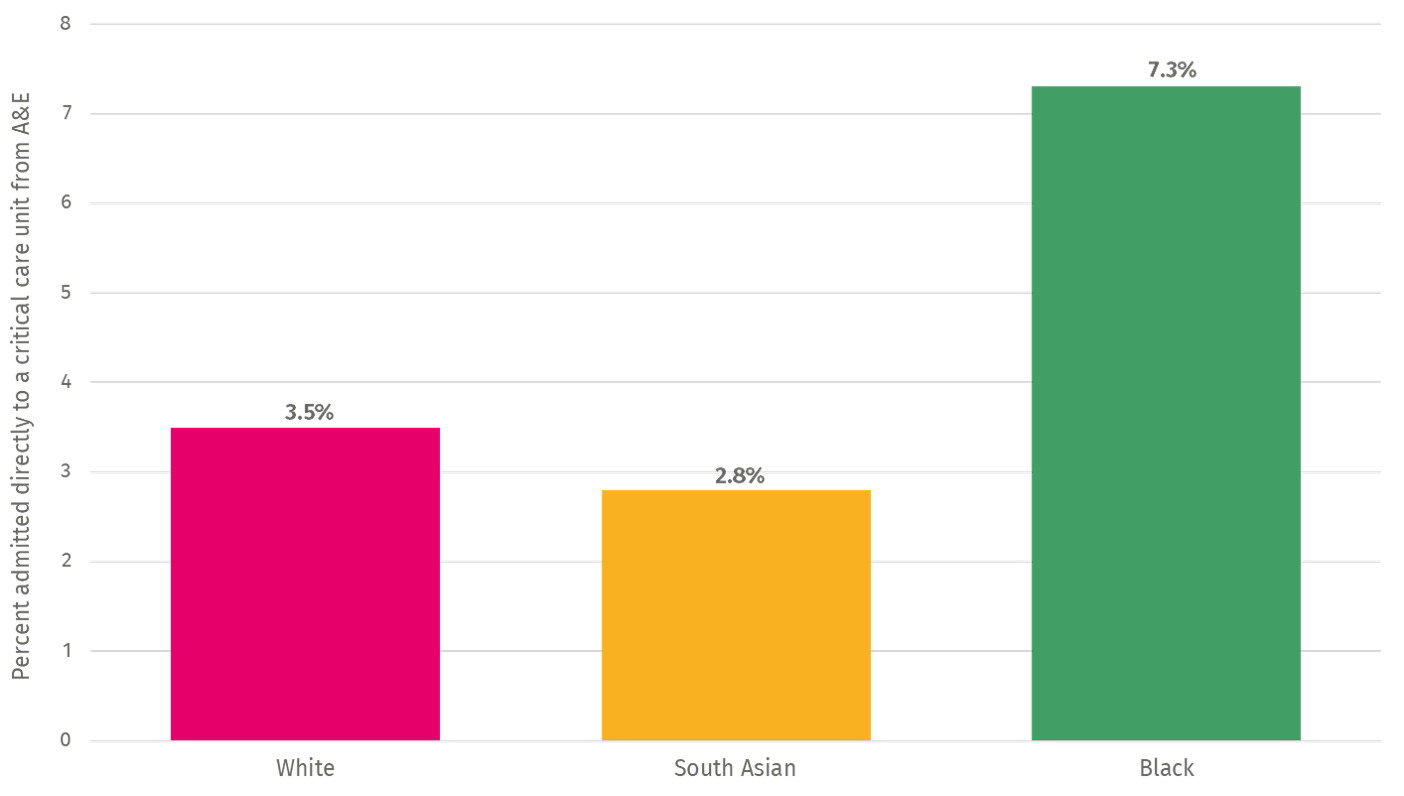 Racial inequalities are a stain on our claim to be a civilised society - it is time to address systemic racism. The measures outlined in this article will help us to control the pandemic and mitigate immediate ethnic inequalities. Failure to deliver on this agenda is not an option: this is a crisis that must be addressed. But such measures are applying a plaster to a more profound wound that could be prevented. Covid-19 has brutally exposed the racial inequalities that sit at the heart of our society. Too little attention has been paid to the socially stratified structures and stigmatisation that makes race a determinant of health. Far from being scared to add to the work of government at this difficult time, this is precisely the moment to put justice at the heart of policy and embed health in all policies. IPPR and Runnymede Trust have previously called for a national health inequalities strategy to be introduced. It is vital that racial inequalities sit at the heart of this agenda so that we can build back a better, fairer society.

Parth Patel is a research fellow at IPPR

Alba Kapoor is a policy officer at the Runnymede Trust

Nick Treloar is a research analyst at the Runnymede Trust

With thanks to Ben Richardson, Will Browne and Farhan Chatha of CF Healthcare Consulting for their analysis for this piece, and to Dan Lewer from UCL and Harry Quilter-Pinner, David Wastell, Robin Harvey and Carys Roberts from IPPR for their insights. IPPR would also like to thank all of the supporters of the Better Health and Care Programme: AstraZeneca, Gilead Sciences, GSK, Lilly UK, AbbVie, Janssen and Siemens Healthineers.

During the Covid-19: Disparate Impact debate in the House of Commons on the 22nd of October a key statistic from this research was questioned by the Minister for Equalities. To clarify this, we have added a short explanatory note on the m​ethodology we have used to produce this statistic.

We obtained ethnicity-specific data for all recorded deaths related to Covid-19 between 2 March 2020 and 15 May 2020 in England and Wales from the UK Office for National Statistics (ONS). Data included the decedent’s ethnicity, sex and age group (9-65 years or over 65 years). Population estimates by ethnicity, age and sex were obtained from the 2011 ONS Census data, which is the latest available data.

We stratified the mortality and population data according to age group (9-65 years, >65 years), sex and ethnic group (white, black and south Asian), yielding 12 strata. Within each age group and sex, the mortality rate for a particular ethnic group was used as a reference group and applied to the other ethnic groups to produce a number of expected deaths. We then calculated the difference between the observed and expected deaths.

Using the white ethnic group as the reference population, we estimate 2,507 deaths that occurred between 2 March 2020 and 15 May 2020 in England and Wales would have been avoided if the black and south Asian populations did not experience a greater risk of death from Covid-19 compared to the white population.

We were unable to obtain more granular age-specific data than the coarse age groups of 9-65 years and over 65 years. We requested ONS for this data but they were unable to provide this data. Based on black and minority ethnic populations being younger than average, our estimates of 58,000 and 35,000 additional deaths is likely to be conservative.