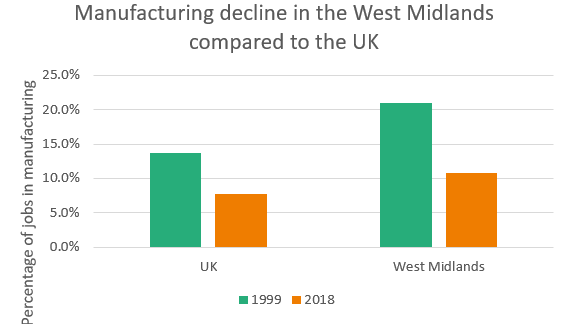 Source: IPPR analysis of workforce by industry (SIC 2007) (ONS)
Despite this, the value of goods exported per working age person is the highest of anywhere in the UK at over £9,000.2

This suggests that workers in the West Midlands will be less able to access higher skilled and better paid jobs than the average worker in the UK and that this situation may be worsening over time.
References
1. IPPR analysis using Workforce jobs by industry (SIC 2007) (ONS)
2. IPPR analysis using UK imports and exports by region (UKTradeInfo) and population estimates by age (ONS)